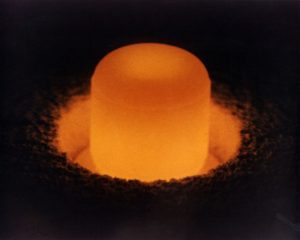 A glowing cylinder of Plutonium-228 (Source: US Department of Energy).

According to Space News, NASA has begun mapping out the steps need to resume production of Plutonium-238, using money included in the 2011 NASA budget. NASA has been pressing on the need to resume the production of Pu-238 for several years. President Obama budget request for 2012 included $20 million for the Pu-238 program, to be split between NASA and the Energy department. But on September 7, the U.S. Senate Appropriations Committee approved a spending plan for 2012 that did not include funding for the Energy Department for this purpose. Similar requests have been denied in the previous two years.

Plutionium-238 is the fuel for Radioisotope Generators (RTG), which are the main power source for deep space spacecrafts such as Cassini. Missions to Jupiter and beyond require RTGs because at that distance the sun is too dim to allow solar panels to produce a fair amount of power. NASA’s next martian rover, the car-sized and power hungry Mars Science Laboratory Curiosity, will also be nuclear powered: martian dust causes in fact quick degradation of solar panels, as it happened with Spirit, which stopped working in May 2011.

US stopped national Plutonium production in the ’80s. Since then, NASA has progressively exhausted the national supply. The lack of national production has forced NASA to rely on Russia. Besides funding, resuming production would require six to seven years.