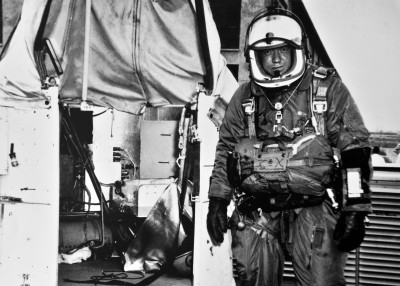 Then-Capt. Joseph Kittinger stands next to the Excelsior gondola which, supported by a helium balloon, carried him 102,800 feet above Earth. Kittinger set historical records for highest balloon ascent, highest parachute jump, longest drogue fall and fastest speed by a human being through the atmosphere. The 52-year-old records stood until last fall when an effort aided by Kittinger himself broke his records (Credits: U.S. Air Force photo).

When Joe Kittinger made his world-record jump from 102,800 feet on Aug. 16, 1960, as part of Project Excelsior, launch couldn’t even take place until one man gave thumbs up. “Our forecasts were provided by one of the best meteorologists in the Air Force…: Bernard ‘Duke’ Gildenberg,” Kittinger wrote in “Come Up and Get Me” (UNM Press/2010, with Craig Ryan). “If Duke said go, you went, or you’d wonder why you hadn’t.”

Gildenberg, Ryan said in his 1995 book “The Pre-Astronauts” (Naval Institute Press), “was a remarkable man” whose “specialty was assessing wind patterns. If a small load was dropped with a parachute from 100,000 feet, it was said, Duke could pinpoint the landing spot within 100 yards. As (Man High pilot Dr. David) Simons put it, ‘If Duke Gildenberg looked up at a clear summertime sky above the Sahara desert and said it would snow within five minutes, I would start looking for a pair of snowshoes.’ ”

Such testing, the majority done at New Mexico’s Holloman Air Force Base, beginning with Man High in 1957 and ending with Excelsior in 1960, was the first to send man into unforgiving space. Would an astronaut survive above the atmosphere? Dr. John Stapp directed the projects Man High and Excelsior, which set out to prove that, yes, he could.

From experience, Gildenberg understood the risks; he knew his forecasts might mean the difference between life and death.

“He loved to fly balloons,” said “The Pre-Astronauts.” “Gildenberg’s interest in high-altitude operations was not limited to weather forecasts.” He even hoped to be considered a Man High pilot, and had “briefly been considered as a subject for the test flight.”

“I was a balloon (pilot), amateur astronomer, amateur photographer,” Gildenberg said in an oral history he gave in 1998, at the International Space Hall of Fame in Alamogordo, New Mexico.

“He passed the claustrophobia test, the pressure chamber test, and the parachute test,” said “The Pre-Astronauts.” And, he pointed out in his oral history: “The only real danger … is where there is an unknown factor in the stratosphere with cosmic rays. You might wind up being sterile. I said, ‘Well, since I am free run and a bachelor, that might be a good deal.’ ” 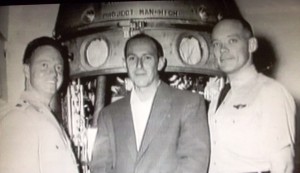 What disqualified Gildenberg was an injury he suffered from “a landing mishap in New Mexico during a free-balloon training flight with both Kittinger and Simons aboard.” Ryan documented how “Simons was thrown into Gildenberg, fracturing some of the meteorologist’s vertebrae, snapping two of his ribs, and forcing Duke back into his original role – less glory, but perhaps an even greater responsibility. Gildenberg would set the launch date and give the final approval to launch. He would have the authority to cancel the flight up until the last instant.”

According to his oral history, Gildenberg came from a family with “a real high percentage of engineers and scientists all over the world.” His father, Abe, saw combat in World War I, and suffered the rest of his life from being “mustard gassed.” Ironically, the senior Gildenberg fought in Germany against family members: millionaires who owned a manufacturing plant and “a castle on the Rhine.” The family only began to migrate in the late 18th century because “everybody in Europe thought that the Communist revolution was going to be in Germany,” Gildenberg said. Spies were “infiltrating” the family business, and in 1900 when his “dad came over as a kid,” Abe was “pursued by Communist agents.”

The war cost the Gildenbergs remaining in Europe, everything.

“We got wiped out by the Allies,” Gildenberg said.

Born before the Great Depression, Gildenberg’s high school dream was to be a journalist, and at age 17 he applied to Collier’s magazine. However, when World War II came along, he set his sights on becoming a military pilot.

“So did everybody else,” Gildenberg said. “I got part way through aviation cadets’ (training), and then got washed out on a back physical. … I happened to hit it at a time when they had an oversupply of pilots. So I got washed out.”

He next applied for air crew training.

“I had a nasal problem, supposedly. They washed me out on that,” he said. 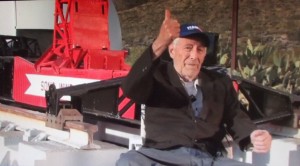 Duke Gildenberg reminisces at the New Mexico Museum of Space History, in the Foolish Earthling Productions documentary, “The Land of Space and Time” (Credits: Michael Lennic).

Gildenberg’s third choice was ground crew; once chosen, he decided upon weather. Previously, he said, just out of high school, he’d spent six months “at the Pentagon” as a “cryptographer,” a position that got him “a top secret” clearance. Still a teenager, he “was decoding messages from the resistance fighters in Europe behind the lines,” as well as “work(ing) on decoding messages to and from bombers en route to Japan in real time.”

He also participated in “meteorological cryptography,” or “trading weather reports” with allies. Knowing the weather was, of course, crucial to the success of flight missions.

“During the war,” Gildenberg said, “there were no weather reports in the paper. You remember, they were all classified.”

Stationed in the Aleutian Islands toward the war’s end, Gildenberg’s weather duties included radiosonde work with balloons that were released to gather upper-atmosphere data. Once discharged, he studied at the New York University Research Department School of Engineering, Guggenheim School of Aeronautics, he said. There he met and befriended an upper classmate, Charlie Moore, who would eventually work on Project Mogul. This balloon project carried microphones into the tropopause to, officially, listen for atomic detonations in the Soviet Union.

The illnesses that Abe Gildenberg suffered from World War I set the course of his dutiful son’s personal life.

“I really never got married because I supported him and my mother,” Gildenberg said. “And I felt obligated, being a war veteran myself, to take care of them. So I had full support of my parents until I was age 55.”

Check back for Part 2.