Read part 2 of this series here. 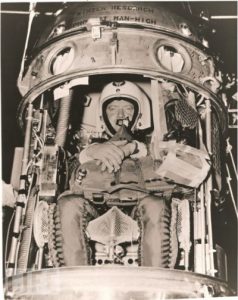 NASA wasn’t even a year old when, in 1959, Dr. John Stapp’s Project Excelsior set out to see if a man could survive a high-altitude free-fall. Capt. Joe Kittinger piloted three gondolas skyward from Holloman Air Force Base, New Mexico, and then stepped outside to plummet back to the white sands of the Tularosa Basin.

“We had great plans for Man High,” meteorologist Duke Gildenberg said in a 1998 oral history, given at the International Space Hall of Fame in Alamogordo, New Mexico. “We wanted to do a gondola with an outside porch. And then have the guy do kind of a spacewalk, go out on the porch and check the pressure suits. That was before (Kittinger) did it on Excelsior.”

According to Gildenberg, NASA, in the early years of the Cold War-era Space Race, “was getting most of the” coveted government “funds,” which negatively affected Excelsior. “We just ran out of money,” Gildenberg said.

“(Duke) had advised us to initiate our test flight somewhere to the west of Holloman so that the westerly winds aloft would blow us over White Sands Missile Range,” Kittinger wrote in “Come Up and Get Me” (UNM Press/2010).

Kittinger piloted Excelsior I to 76,000 feet before free-falling and parachuting. The jump was almost fatal. His small parachute, which should have stabilized him, opened automatically after only two seconds of free fall because of a 16-second delay exiting the gondola. Kittinger spun 120 revolutions a minute and lost consciousness. Only his emergency parachute, which opened automatically at 10,000 feet slowed his descent.

“When I came to, I was floating lazily down beneath the beautiful canopy of the emergency chute. I want to tell you I had a long thank-you session with the good Lord right then and there,” Kittinger wrote in the Aug. 29, 1960 Life magazine.

Excelsior II, which lifted off on Dec. 11, 1959, “rose up to 74,400 feet without incident,” Kittinger wrote. He “landed gently in the desert sand,” he said, with “no drama, no worries.” Excelsior III was a far different experience.

“Our weathermen,” Kittinger said in Life, “are facing their most intricate task. They must bring me to earth in an 11 (square-mile) target area about 25 miles northwest of Holloman. They must predict weather conditions for the following morning high aloft as well as on the ground, and decide if surface winds will permit a safe take-off. Checking with Holloman base weathermen, they reach a favorable decision and choose an abandoned dirt airstrip 18 miles from the base as the launching site.”

“The prospect of exposing the hand to the near-vacuum of peak altitude causes me some concern,” Kittinger wrote. “I know that the hand will swell, lose most of its circulation, and cause extreme pain.”

He chose not to inform his ground crew. Excelsior was out of funds. An abort would mean the program was over, and Stapp would have aborted the mission to protect Kittinger.

“Duke Gildenberg, who had never brought a balloon down more than a quarter mile from its target, asked that the balloon float at that altitude for 11 minutes while it drifted over the preferred drop site 20 miles below,” said The Pre-Astronauts (Naval Institute Press/1995).

Less than two hours after liftoff, Kittinger stepped out of his gondola. His hand has caused him problems, but he landed.

“Elapsed time since bail-out is 13 minutes, 45 seconds,” he wrote in Life. “I am surrounded by sand, salt grass, and sage, but no Garden of Eden could look more beautiful.”

Twenty-two years later, Kittinger entered the Tropicana Aero Cup Race, a competition that left from Las Vegas, Nev., in November 1982. He asked Gildenberg to “handle the weather forecasts from his home near Alamogordo,” Kittinger said in Come Up and Get Me. “Nobody understood weather and balloons the way Duke did, and I knew he would be our secret weapon.”

On Nov. 12, the competition’s first day, Gildenberg advised Kittinger to hold off launching for more than 24 hours, even as competitors took to the air. Erratic weather patterns ended up taking the early balloonists west instead of the hoped-for east, where the first to reach New Jersey would claim the $100,000 prize. Twenty-four hours later, stalled winds forced them down.

On Nov. 13, Gildenberg would still not give thumbs up. Finally, the next day, he said go.

“At 12:59, one minute before the deadline,” Kittinger rose into the sky,” Come Up and Get Me said.

“I planned to contact local radio operators and have them call Duke in New Mexico to get his recommendations on optimum altitudes for the best wind patterns,” Kittinger wrote.

“I managed to get Duke on the phone through a local ham operator, and (Gildenberg) informed me that I wasn’t going to be able to make New Jersey because my winds were going to keep me too far to the north.”

Seventy-two hours and 2,033 miles after leaving Las Vegas, Kittinger landed on a pig farm in New York. He hadn’t won the $100,000 prize (no one did), but he did set a long-distance balloon record.

Gildenberg had retired in 1981, he said in his oral history, but that didn’t last. Within two years he was working as a contractor and consultant on various projects.

“Gildenberg, who was a major player in all the Air Force high-altitude manned balloon programs, continued through the sixties, seventies, and eighties to contribute to high-altitude research both for the Air Force and for NASA,” said The Pre-Astronauts. “Gildenberg participated in the Air Force’s re-entry and reconnaissance testing for a number of NASA projects, including Apollo. Most of this work was considered highly sensitive and was conducted in secret.”

For the remainder of his life, until he died in early 2013, Gildenberg made his home in Tularosa, New Mexico, as “a cattle rancher.” From there you can see White Sands Missile Range and Holloman. The skies above both were where he’d plied his trade, and helped to prepare space for future astronauts.

This concludes the story of Duke Gildenberg. If you missed the beginning of the series, you can start from Part 1, aviailable here.