Read Part 1 in this series here. 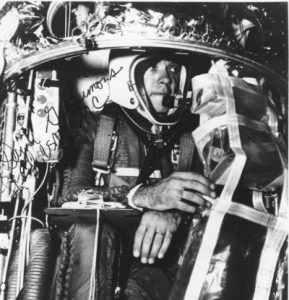 A “self-described ‘balloonatic,’” Duke Gildenberg became “involved with scientific ballooning at Holloman (Air Force Base) from its earliest days,” said The Pre-Astronauts (Naval Institute Press/1995). After his war service as a military meteorologist, Gildenberg became “part of the New York University program that had worked on the animal flights with the Army,” and he found work in classified projects.

“Jobs were scarce,” he explained in a 1998 oral history at the International Space Hall of Fame, in Alamogordo, New Mexico. “It was a mini-depression, just before the Korean War broke. As soon as the Korean (War) broke, the first day I got two offers.”

He chose a position with the Naval Ordinance Test Station. His duties were related to the test track at China Lake, Mojave, Calif. Then, in February 1951, Gildenberg went to Holloman where much of his work had to do with previous experience: ballooning. Only four years into the future would men squeeze into gondolas to perform science firsthand.

“The U.S. Air Force established Project Man High in December 1955 to obtain scientific data on the behavior of a balloon in an environment above 99 percent of the earth’s atmosphere,” the website nationalmuseum.af.mil documented.

“I was involved with all of the Man High flights,” Gildenberg said.

Man High I lifted off on June 2, 1957, at 6:23 a.m., from a Minnesota pit mine.
“The gondola that we were in was three feet across and seven feet high, which was really smaller than a telephone booth; but we had all the life support systems and communications that we would need to go into a space environment,” the pilot, Capt. Joe Kittinger, said in filmmaker Michael Lennick’s documentary, The Land of Space and Time (Foolish Earthling Productions).

“Duke had warned us about the potential for 100-mile-per-hour jet stream winds, and at 45,000 feet I prepared myself. I knew this was the point where most balloon failures occurred,” Kittinger said in Come Up and Get Me (UNM Press/2010).

“The huge balloon was flung nearly horizontal in powerful gusts,” said The Pre-Astronauts. Kittinger “would write later” that the experience “ ‘absolutely frightened the hell out of me.’ ” 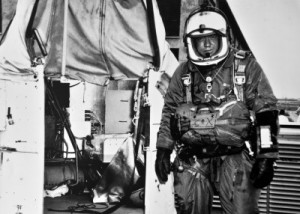 Kittinger became an extreme altitude balloonist. Here he stands next to the Excelsior gondola which, supported by a helium balloon, carried him 102,800 feet above Earth, setting records some of which still stand today. (Credits: USAF).

His apogee was 97,000 feet altitude; there he floated for just under two hours and discovered his radio didn’t work. He had only a telegraph with which to communicate to Dr. John Stapp and the ground crew. According to The Pre-Astronauts, technicians had reversed oxygen lines and more than half of Kittinger’s supply had vented into the stratosphere. He “shut down the cabin oxygen … and used the oxygen supply to his pressure suit.”

Stapp was not amused.

“I was just trying to be funny, and they got a little excited, I guess,” Kittinger said.

Regardless, said The Pre-Astronauts, “the oxygen system foul-up had come within minutes – if not seconds – of killing” Kittinger.

Ordered to land, Kittinger descended “at 1,000 feet per minute,” Stapp said in the June 5, 1957 Alamogordo Daily News; he called the landing “a perfect let-down.”

“Our meteorologist thought, ‘Well if we launch just at the beginning of this formation, he’ll be up there long enough to come down on the other side of it,’” Stapp said in The Land of Space and Time. “It was bigger than the meteorologist had figured and he was up for 32 hours and 10 minutes.”

At liftoff, the balloon hoisted the gondola at 1,100 feet per minute. Two hours and 15 minutes later, Simons reached apogee at 100,516 feet, setting an altitude record. That night the extreme cold so deflated the balloon that Simons dropped to 68,000 feet.

“I knew there was a thunderstorm area he had to fly over at night, but I figured, Well he’s not going to come any lower than 60,000 (feet) so it should be clear,” Gildenberg said in Lennick’s documentary. “But at the time we didn’t know that some of those lightning storms actually go up in the clouds, into the stratosphere, and he had some close ones that night.”

Fearing lightning would strike the 200-foot dangling communications antenna, Simons ejected a hundred pounds of batteries; The Pre-Astronauts said “the gondola jumped hard.” By morning, the capsule’s temperature was only two degrees above freezing, but the rising sun’s warmth slowly pushed the thermometer to a stifling 82 degrees. The only task left was to land. Simons dropped 1,300 feet-per-minute, according to The Pre-Astronauts. Soon, a parachute floated the capsule into a plowed field near Elm Lake, South Dakota. Simons, who had landed 405 miles from the launch site, crawled out and calmly greeted a farmer with, “How are you today?”

Stapp, in The Land of Space and Time, said Simons had “lost 17 pounds. It was not a joyride by any means.” 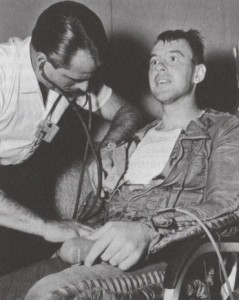 A doctor examines Lt. Clifton “Demi” McClure after his Man High III mission. His parents nicknamed him Demi after he was born on the night Franklin D. Roosevelt, a Democrat, was first elected president (Credits: USAF).

The final Man High left Earth on Oct. 8, 1958, from Holloman. Gildenberg, in his oral history, said he and other scientists and doctors were aboard a circling cargo aircraft, monitoring pilot Lt. Clifton “Demi” McClure.

“He ran into trouble, and that was the end of the scientific part of it,” Gildenberg said. “There was a real Hollywood kind of drama where we had to get him down alive.”

His body temperature rose to 108.5 degrees Fahrenheit. According to Gildenberg, the crew “kept saying … ‘This guy is not going to make it.’ ”

Exacerbating the situation, “communications with McClure were permanently interrupted when he dropped his spot photometer on the floor,” said the website stratocat.com.ar. “The instrument jammed the foot switch of the capsule transmitter so he could receive but not transmit.”

“McClure was an absolute monster,” Gildenberg said. “I mean, he was built like a boxer and he’s got a Master’s degree at the time. He told me, and we were buddies, we used to fly together all the time, (in) his glider. He told me afterward, ‘You know what I was doing up there?’ He says, ‘I was trying to think what kind of condition each one of you guys were in so when you gave me ideas I can evaluate how good they were. He says I know how so and so functions under stress, and I am not sure I am going to buy anything.”

Gildenberg believed McClure would “have been the perfect astronaut.”

Stay tuned for the third and final installment in this series.