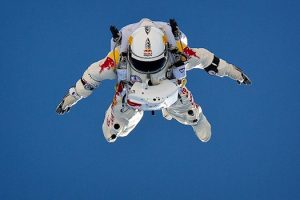 Leaping Into The Unknown BASE jumper Felix Baumgartner plummets toward Earth in a pressuresuit during a test skydive. The grand attempt will be a jump from 120,000 feet (Credits:Jay Nemeth/Red Bull Content Pool).

The much awaited launch of the world’s most celebrated B.A.S.E. jumper Felix Baumgartner to an unprecedented altitude has been postponed from the morning  of Monday October 8 to, most likely, Tuesday morning. Baumgartner arrived at the Roswell Red Bull Stratos launch site in New Mexico on Friday to begin launch preparations when the professional meteorologist Don Day delivered the news of a 24-hour delay to him and the entire launch crew.

“Instead of flying Monday as scheduled, our attempt to reach 120,000 feet will probably take place Tuesday,” Day said. “The good news is that we usually have a day or two after this type of cold front moves through where the weather can be favorable for a balloon launch.”

Weather is one of the primary factors and most unpredictable one affecting the success of the mission. Day identifies optimal weather patterns for all Red Bulls Stratos launches. “The wind for the launch of the 30 million cubic feet balloon must be 2 mph or less,” Day said. But weekend wind speeds were forecast to be at 5 -10 mph (or 8 -16 km/h) with winds near the balloon top at 10 -15 mph (or (16-24 km/h).

The severe weather forecast over the weekend through Roswell, NM, would deliver short-pulsed strongly blowing winds with speeds significantly above acceptable levels for a safe launch. Although the weekend weather with sharply colder temperatures, low clouds and some drizzle would greatly improve with clearing skies and warmer temperatures during Monday, the morning conditions will not be perfect for launching the delicate helium balloon, which is made of plastic that has 1/10th the thickness of a Ziploc bag.

Baumgartner will launch with the largest manned balloon in history measuring a height of 550 feet or 168 meters and have a volume of 30 million cubic feet or 850,000 cubic meters at the start.

The delay does not influence onsite preparatory activities for the mission. In the night from Friday to Saturday, Felix Baumgartner and the team rehearsed the 7-hour pre-launch dressing procedure exactly as it will take place for the actual launch now likely to occur on Tuesday morning.

Watch a video of Felix Baumgartner’s test jump on March 15, 2012 below: