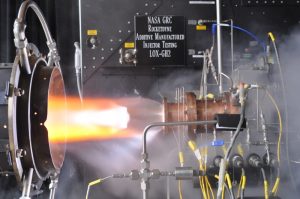 NASA and Aerojet Rocketdyne have recently finished testing a rocket engine injector made through 3-D printing. As shown by the successful technology demonstration, additive manufacturing may become an efficient and cheap way to build future rocket engines. “NASA recognizes that on Earth and potentially in space, additive manufacturing can be game-changing for new mission opportunities, significantly reducing production time and cost by ‘printing’ tools, engine parts or even entire spacecraft,” said Michael Gazarik, NASA’s associate administrator for space technology. The test was conducted at NASA’s Glenn Research Center (Glenn) in Cleveland and it consisted of a series of firings of a liquid oxygen and gaseous hydrogen rocket injector assembly. The test demonstrated the ability to design, manufacture, and test a highly critical rocket engine part. Aerojet Rocketdyne designed and fabricated the injector using a method that employs high-powered laser beams to selectively melt and fuse fine metallic powders into three-dimensional component. A traditional process would take more than a year to manufacture the same type of injector while it took less than four months with 3-D printing. Tyler Hickman, in charge of the testing at Glenn, explained that the injector is one of the most expensive components in a rocket engine because it requires a large quantity of labor and time. The additive manufacturing may lead to a 70 percent reduction in cost, which is quite significant, considering that the injector represents a large portion of the resulting cost of the system. Glenn and Aerojet Rocketdyne partnered on this possibly groundbreaking project with the Air Force Research Laboratory, which provided a unique high-pressure facility to study the spray patterns of additively manufactured injector elements. According to Carol Tolbert, manager of the Manufacturing Innovation Project at Glenn, the successful hot fire testing showed that NASA is ready to move on to demonstrate the feasibility of developing full-size, additively manufactured parts. Before this test, addictive manufacturing was trusted most often to make only simple brackets and other less critical hardware.