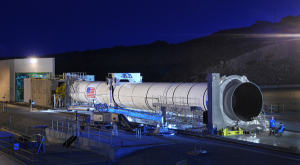 The United States Air Force and ATK Aerospace Systems successfully completed a static firing test of their new Large Class Stage III rocket motor.  “The successful motor firing was an important milestone for the US Air Force’s Large Class Stage III program,” said Scot Lehr, Vice President of ATK Aerospace Systems and General Manager of Strategic and Commercial Systems, “the results of this test are important and will apply directly to the development of next-generation systems.”

The 2.3-meter diameter solid rocket motor is designed to ignite at altitudes above 26km. The test occurred at the Arnold Engineering Development Center in Tennessee, inside a vacuum chamber designed to simulate the expected atmospheric operating conditions. The motor performed within the predicted results for the duration of the test.

The Large Class Stage III program applies technology from the Propulsion Applications Program and the Integrated High Payoff Rocket Propulsion Technology Program. The objectives of the program include the development of a Family of Motors (FOM) compatible with next-generation launch systems. Potential FOM applications could include  the Development Motor-3 (DM-3) to be used on NASA’s Space Launch System (SLS) andATK’s Conventional Strike Missile as an “operationally responsive” enabling technology.

The video below shows a static firing of the DM-3 rocket motor on Sept 11, 2011.
[youtube http://www.youtube.com/watch?v=7BSEvI6EsaE]