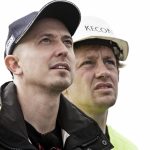 On June 3, 2011, Copenhagen Suborbitals, a two people enterprise located in Copenhagen, Denmark, successfully launched a homemade rocket over the Baltic Sea. The 9 meter rocket, launched unmanned, was equipped with a capsule which has the capability to host a man in a semi-standing position. This undertaking represents an important milestone for the Danish company, whose goal is to discover “the secrets about getting into space if you are broke.” We contacted Kristian Bengtson to talk about the initiative. Copenhagen Suborbitals is non profit and open source space project founded in May 2008 by Kristian von Bengtson and Peter Madsen, two alumni of the International Space University whose dream is to launch themselves into space on top of a homemade space rocket. The initiative, headquartered in Copenhagen, Denmark, is financed with private donations and companies: “We spend about 100.000 dollars a year,” they explain, “but get perhaps twice the amount in donated hardware.” According to Kristian, the flight was “Short and exciting. We only reached a 2 km of height and 8 km downrange. The trajectory was bad, but we managed to get something into the air, and that was a special corner for us to turn.” The flight achieved the objectives: “We had a launch, where able to up and downlink all data and commands to the rocket and spacecraft. We separated the spacecraft, deployed the parachutes and recovered the spacecraft and all data.” Equally important for them was the work atmosphere: “We had a perfect and calm operation when doing all this. We are still learning. There are so much data, still being analyzed.”

“We do not hold any secrets or any patents and we want all our ideas – sketches, photos and video – to be free for everyone to distribute in order to inspire people and to spread the story„ 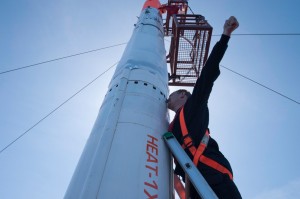 Copenhagen Suborbitals is definitely an unusual space company. The footer of the website reads: “Copehagen Suborbitals 2011 – Absolutely No Rights Reserved”, a sort of mission statement: “I’m glad you found it,” says Kristian, “It’s the essence of the project. We do not hold any secrets or any patents and we want all our ideas – sketches, photos and video – to be free for everyone to distribute in order to inspire people and to spread the story, or even copy.” According to Kristian, the activity of Copenhagen Suborbitals revolves around a key principle: “Less talk and more production”. The development process is geared toward finding the quickest and cheapest solution to all problems: “We basically have a plans and ideas, and then we just build it together with our part time specialists,” says Kristian, “Instead of talking too much about it, performing simulations, we build and test our ideas all the time. If they seem like a good idea and did well during the tests, we implement them in the rocket. The final launch then becomes an all up test of all these systems and ideas combined.” We asked how safety can be insured while keeping the cost down: “Low cost creates low tech solutions,” replied Kristian, “Low tech solution creates high safety.” He then quotes the Apollo command module as an example: “The module had about 2 million components and even with a 99.99% safety margin, NASA knew that at least 2000 components would fail during the flight to and from the moon.”

“The activity of Copenhagen Suborbitals revolves around a key principle: “Less talk and more production”„

Simplicity turns out to be the key design factor for Copenhagen Suborbitals: “Instead of having a processing unit showing a particular pressure in a tank, on to a digital display, we will use an old fashion manometer instead. We trust solutions like this, and it is actually much cheaper,” he says, “We do not believe that [relying on new technologies] is the only way. It is only a matter of “lower yourself” to a more primitive level and accepting this.”An example of this approach is the cork heat shield: “Cork is a cheap, lightweight material which can resist a lot of heat. Even more heat than the spacecraft will be exposed to. When you reach apogee you start from V=0 and fall at a relatively slow speed compared to orbit-spaceflight. Also, we have drag inducing devices that will control the fall.” This unorthodox approach poses both technical and non technical challenges, like in the case of parachutes: “No one would sell us parachutes, because this expertise is a matter of safety and reliance, “says Kristian. “I could not guarantee any manufacturer that their products would not be seen failing or even on fire. It forced us to create our own parachutes, which we did. Now we have this development in house and I trust the path we are on very much.” The parachute failed during the first launch: “They are not rated for deployment just below mach 1. So the deployment failure was expected under those circumstances.” 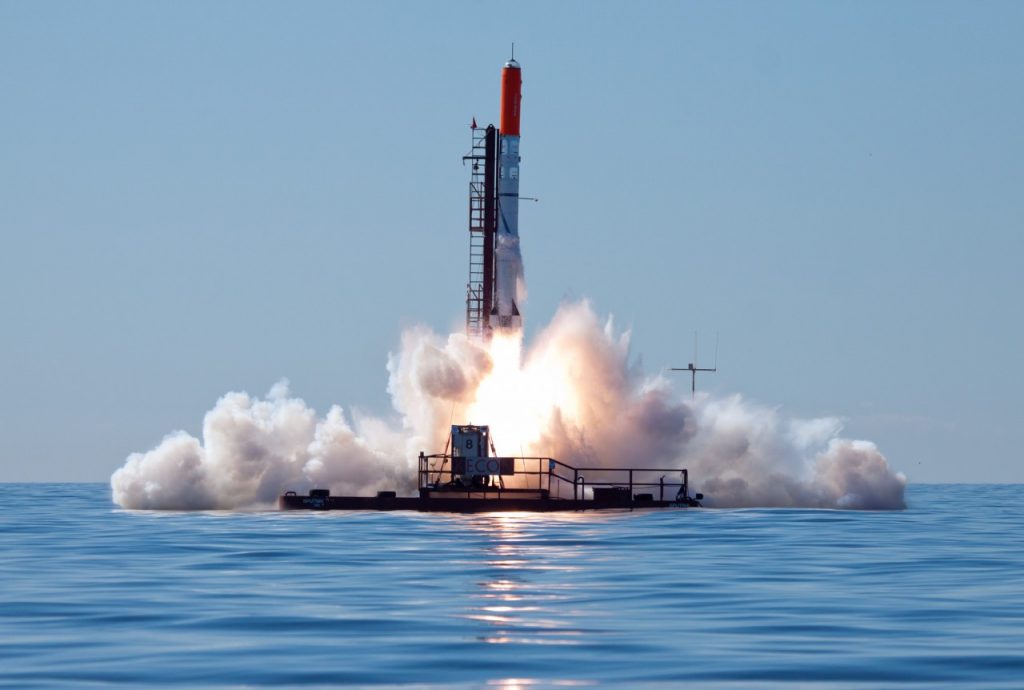 Safety on the Ground 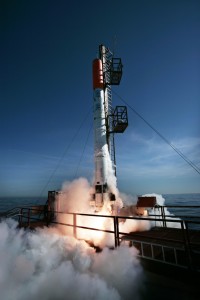 The rocket is launched from the Sputnik platform, a 13.7×12 meters steel catamaran equipped with two Kubota D722 diesel engines. The platform is designed to be simple, cheap and stabile: “We like the idea of launching and landing on water,” explains Kristian, “If we are able to control this environment we are basically able to launch our rockets from anywhere in the world to any height.” The launch area is in the Baltic Sea, east of Bornholm, Denmark: “We have been given the military launch area for a specific date, through the Danish Admiral Fleet, and work with the Navy National Guard in Denmark, who are taking care or range safety regarding ships and closes the air space over the Baltic Sea. All these aspects are a big part of the operation and have been planned months ahead with everyone involved,” he says. The rocket uses a hybrid rocket engine, fuelled by solid polyurethane and liquid oxygen. “The components are not toxic – the polyurethane is during production. However, we recover all parts, both engine and spacecraft, after a launch if possible.” About safety of operations, Kristian explains: “We always work with safety first. Human life before the operation. The mission operation was planned for many months in details and rehearsed several times. We have specific tasks for specific people, a strict command structure and mission rules taking all possible foreseeable contingencies into account.”

Safety of the astronaut 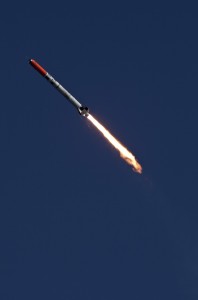 The Tycho Brahe spacecraft uses an unusual configuration, where the astronaut is standing along the vertical axis of the rocket, looking outside from a glass nose cone. Kristian jokes: “It’s a discount space program. So you have to stand.” Then explains: “it’s vital for us to make the space ride a great experience where the passenger has a great panorama view. We came across the acrylic top dome, which became a design driver. The dome also fitted nicely with the chosen 64 cm diameter for the entire rocket, resulting from bending a 2 meter cheap steel plate. We knew that if the astronaut was to be lying on his/her back as usual, the rocket would be so big and heavy that it would be difficult for us to handle the size and weight.” The human body has a tolerance limit of 5g along the vertical axis, a possible source of problems: “We do not come close to that kind of acceleration,” he says in that regards: “It is not a problem to half sit /half stand when being launched with only 3.5 g. When we have active guidance next year, the launch acceleration will be even less.” The Tycho Brahe capsule does not provide a Launch Escape System (LES): “We discussed the implementation of a LES, but decided that you either trust the system or not, after testing it thoroughly.” About redundancy, Kristian explains: “All systems are life critical systems. Some system like parachutes systems have a redundant system and so do all communication and electronics that will deploy parachutes.”

For a Cheaper Spaceflight

“It is interesting if we are able to change the way we look at human space flight. Right now, it’s a “holy grail” and can only be done by great nations will billion of dollars. If we can show that it can be done otherwise I think we can shake up the space arena a bit„ 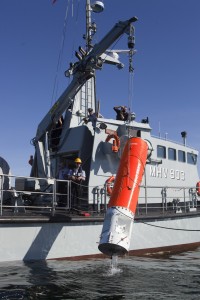 To conclude our discussion, we asked to Kristian about the possible impact of their work: “it’s my belief that technical progress involving inspiration to mankind will only create a better tomorrow for everyone, he says. “Besides inspiring people to go ahead and make your dream a reality – no matter the topic – I think it is interesting if we are able to change the way we look at human space flight. Right now, it’s a “holy grail” and can only be done by great nations will billion of dollars. If we can show that it can be done otherwise I think we can shake up the space arena a bit. Virgin Galactic is working to offer a suborbital ride comparable to airplane flight, in terms of perceived safety and comfort. In comparison, Copenhagen Suborbital mission profile looks more like a bungee jumping ride, a sort of extreme sport: “There are no rules for making homemade space rockets. The weight of the paper-work, for making air planes, is greater than the final product. We are not doing this as a business. We just want to go into space, in a rocket we build ourselves.” About the first manned flight, Kristian reveals: “When our test dummy Randy is done flying and we believe it is safe to replace him with a person, my partner Peter Madsen will take the first ride.” The next milestone? “We need to have a new rocket, with a new spacecraft ready for a summer 2012 launch. Next time the rocket will have active guidance.” 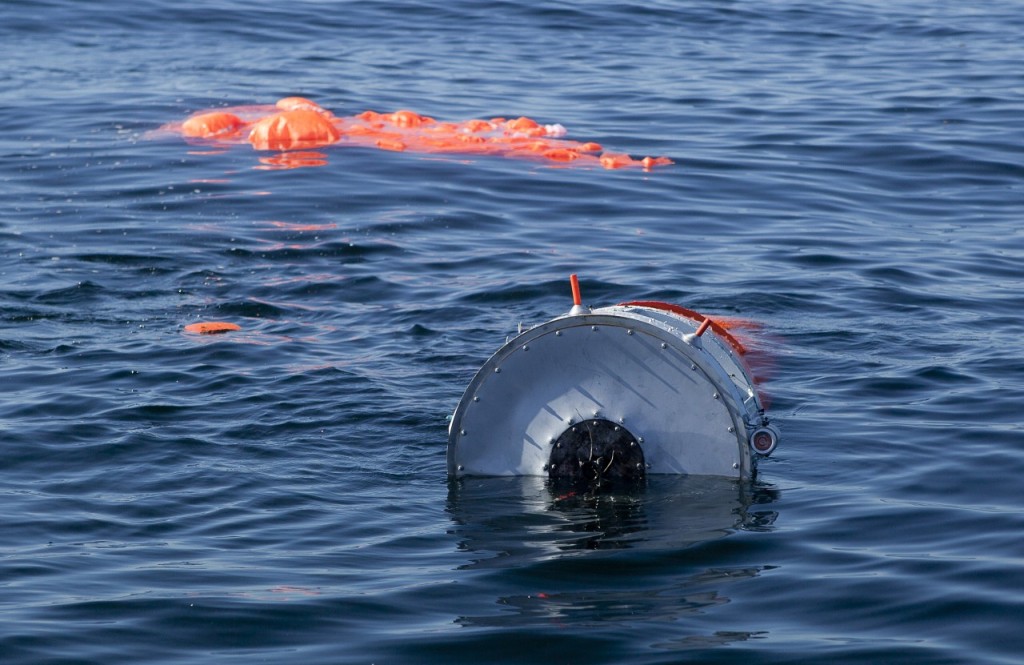