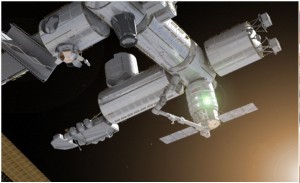 Orbital Sciences Corporation is set to test their new two stage Antares rocket in February this year, along with a mass simulator for their Cygnus cargo freighter.

If all goes well with the demonstration, the company will be following the test with an ISS-Cygnus berthing mission in April.

Both missions will be launched from Mid-Atlantic Regional Spaceport (MARS) in Virginia. The pressurized Cygnus is capable of delivering 20 tons of cargo over eight planned missions, as part of a 1.9 billion dollar Commercial Resupply Services (CRS) contract awarded by NASA in 2008. The Cygnus spacecraft is designed to carry 1996 kg of cargo, but it will carry just 454 kg on its first berthing mission. The Antares launcher itself is designed to carry 5000 kg into LEO.
“We would certainly expect, if we go in April with the demo mission, to carry out at least one CRS mission in 2013,” stated Barron Beneski , a spokesperson for Orbital Sciences, “but that is really driven by NASA’s needs and paced by NASA. Orbital could certainly do two.” Orbital Sciences would be the second private company after SpaceX to provide resupply missions to the International Space Station in the wake of the space shuttle decommissioning. Unlike SpaceX’s Dragon, Cygnus is designed to burn up on reentry and will be unable to return supplies to the ground.

After the eight successful resupply missions, Orbital Sciences plans to continue their role of cargo carrier by introducing a larger version of Cygnus, capable of delivering nearly 2720 kg per launch.

Speaking on the Cygnus docking, Astronaut Chris Hadfield, who will be commanding the ISS during the mission said “The date is still in flux, and they are trying to make sure they do it right.”