The Delta IV Heavy rocket, boosted by the new RS-68A rocket engine, had its successful maiden flight on Friday, June 29 at 9:15 EST, from Cape Canaveral Air Force Station in Florida. 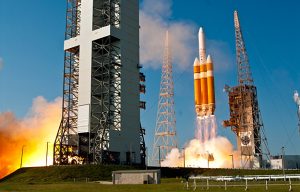 The launch of the world’s most powerful hydrogen and liquid oxygen fueled rocket engine was rescheduled from Thursday to give Tropical Storm Debby time to clear the launch site, and on Friday there were three more hours of delay due to stuck fuel valves.

“It was a great day. It was a thrill to see it get off,” said Steve Bouley, vice president of Launch Vehicle and Hypersonic Systems, for PWR.

The mission was to send NROL-15 into orbit, a classified National Reconnaissance Office satellite. The Pratt & Whitney Rocketdyne (PWR) RS-68A adds 39,000 pounds of thrust to the first-gen RS-68 for 702,000 total pounds of thrust, 284,000 more than the space shuttle’s main engine, but also 20 percent cheaper, since it has 80 percent fewer parts. PWR aspires to make the RS-68A the new standard for the Delta IV Heavy.

This launch could turn out to be a milestone of future space exploration power. “Liquid hydrogen and liquid oxygen is the best combination when you’re looking simply at performance,” says Futron Corporation senior space analyst Jeff Foust of PWR. This combination also uses plain water, thus increasing its importance in exploiting space resources. Water is present in the moon, on Mars, and on asteroids, which have been recently been targeted by Planetary Resources for commercial mining. Space-based refueling depots could become a reality in the next few decades using these resources. 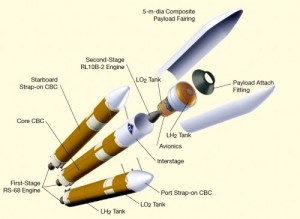 However, hydrogen-power faces two major difficulties; the very low temperature that is needed to remain liquid (-423.17° F/-252.78°C), and a very low density, which requires much bigger propellant tanks. “With denser fuels like kerosene that also happen to be noncryogenic, you can use smaller tanks that help with other aspects of vehicle engineering as well,” Foust says. “If liquid hydrogen didn’t have those disadvantages I think you’d see it in use a lot more, simply because of the performance boost that it provides.”

Steve Bouley, vice president of Launch Vehicle and Hypersonic Systems for PWR, says that the tradeoff is worth the trouble. “Having the ability to give up some of the propellant combination’s performance capability, we were able to use a very simple operating cycle—the gas-generator cycle—for the RS-68 engine, and that allowed us to make it also a very robust engine.”

A video of the launch can be seen below:
[youtube http://www.youtube.com/watch?v=oxMuxZWtiOU]