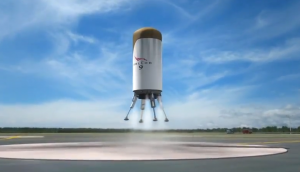 SpaceX presented an animation of a fully reusable Falcon 9 (codename Grasshopper) with Dragon capsule during an appearance at the National Press Club on September 29, 2011. The video shows reentry and vertical return of both stages, as well as the Dragon capsule. According to Elon Musk, SpaceX founder and CEO, reusing the Falcon 9 rocket could lead to a 100-fold decrease in launch costs. Reuse could in fact reduce the cost per flight, considering a unit cost of $50 million and a fuel cost of just about $200,000 per flight.

The Space Shuttle Solid Rocket Boosters (SRB) are the only existing example of reusable rockets, but they are recovered from the ocean after a parachute guided splashdown, and their refurbishment requires a complete disassembly and subsequent reassembly of the rocket motor. SpaceX is currently working on a prototype to be tested at its facility in McGregor, Texas. The development is expected to take 3 years.