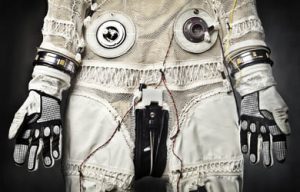 The suit to be worn by Felix Baumgartner during his skydive (Credits: Red Bull Stratos).

An upcoming extreme sports skydive from the stratosphere and an ongoing study at the University of North Dakota are making strides in designing the optimum spacesuit. An upcoming stunt attempt by Felix Baumgartner with support from the Red Bull Stratos team, will attempt a skydive  from the highest altitude ever attempted at 120,000 ft (36,576 meters) in the stratosphere. He would be the first person to break the sound barrier outside of an aircraft and would break the record of Air Force Captain Joseph Kittinger, Jr. set in 1960 free falling from 102,800 feet (31,333 meters). “This mission is all about pioneer work,” Baumgartner said in a February 7 statement. “Maybe one day people will look back and say it was Felix Baumgartner and the Red Bull Stratos team that helped to develop the suit that they’re wearing in space. We want to do something for posterity.” A custom suit has been designed for Baumgartner by the David Clark Company which made the first pressurized suits for World War II fighters.  The suit is composed of fire retardant material and insulated against the -5 to -70°F that Baumgarten may experience during his jump. The uninflated suit weighs 28 pounds. It fits to an 8 pound helmet that maintains a flow of pure oxygen,  a constant 3.5 psi pressure, and includes a fog-treated, heated visor with a sunshade. Medical director Dr. Jonathan Clark, a six time Space Shuttle crew surgeon for NASA, hopes to leverage the suit developments for uses in space travel and tourism. “We’ll be setting new standards for aviation,” said Clark. “Red Bull Stratos is testing new equipment and developing the procedures for inhabiting such high altitudes as well as enduring such extreme acceleration. The aim is to improve the safety for space professionals as well as potential space tourists.” The dive is scheduled to take place in August from Roswell, New Mexico. During the jump, Baumgartner’s physical condition will be monitored in an effort to better understand how people can survive in space 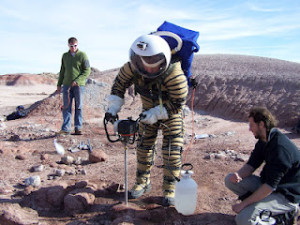 This week the University of North Dakota Human Spaceflight Laboratory (HSL) is testing out its NDX-1 Mars suit at the Mar analog site Mars Desert Research Station (MDRS) in Utah. The suit was specifically designed to meet the needs of Mars as opposed to extravehicular excursions in space. It is designed to address the gravity, thermal conditions, and dust environment of Mars. The project is supported by collaboration with NASA Ames Research Center. The NDX-1 was constructed as a concept prototype and has been tested at several Martian analog sites including the Badlands Region in North Dakota, the Marambio base in Antarctica, and the Pilbara region in Australia, and now the Mars Desert Research Station (MDRS) in Utah. The testing being performed at MDRS is assessing the ease with which wearers of the suit can collect geological samples without undue discomfort and without contaminating the samples. HSL has developed a second model, the NDX-2, targeted for use on the Lunar surface. The video below describes Baumgartner’s upcoming dive.