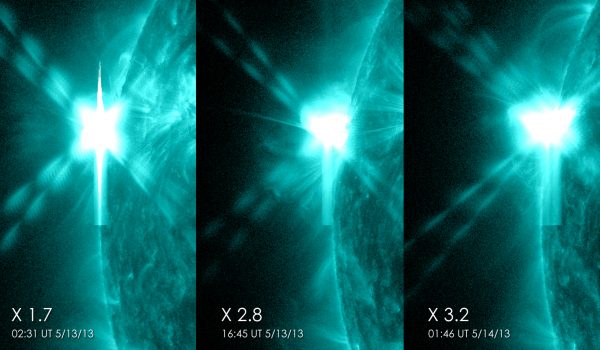 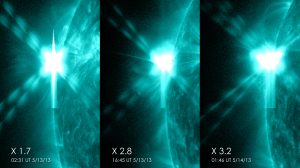 Expected to be a solar maximum year, 2013 has so far failed to produce much in the way of notable solar activity. This week, one sunspot region appears to be making up for the lull. AR1748 has produced three X-class solar flares May 13-14, and the US National Oceanic and Atmospheric Administration (NOAA) is predicting a 50% chance of more X-class flares and 80% of the milder M-class flares through May 16.

When AR1748 shot off its first flare on May 13, the region was not visible from Earth. The region has since been rotating into view, and it’s possible upcoming flares could head in the direction of Earth. The three flares so far also produced coronal mass ejections, which may impact the Epoxi, Spitzer, and STEREO B spacecraft May 15 or 16. NASA reports that these spacecraft may be placed in safe mode if warranted while the ionizing waves pass. The third flare, which was also the strongest at X3.2, emitted a particularly fast CME, travelling at 2250 km/s. NASA reports that this CME is “catching up” to the prior two, forming a merged plasma cloud now bearing down on the aforementioned spacecraft.

Even directed away from the planet, though, these flares were strong enough to impact Earth’s ionosphere. Sudden ionic disturbances (SID) were recorded in Milan, reports SpaceWeather.com. More SIDs can be expected.

The most recent development is an R3 level radio blackout coming from AR1748. A CME has not yet been confirmed.

This video, from NASA, shows the first two flares: