One of America’s first NASA astronauts, Scott Carpenter, has died at age 88 from complications related to a stroke he suffered one month ago.  The former Naval aviator and aquanaut, one of NASA’s original Mercury seven astronauts, passed away today, October 10, at a hospice located in Denver, Colorado.

“Carpenter was in the vanguard of our space program — the pioneers who set the tone for our nation’s pioneering efforts beyond Earth and accomplished so much for our nation,” said NASA Administrator Charles Bolden today.  ”We will miss his passion, his talent and his lifelong commitment to exploration.” 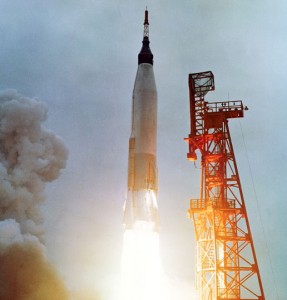 Mercury astronaut Scott Carpenter lifts off from Cape Canaveral on May 24, 1962, in his Aurora 7 capsule. The fourth American in space and second American to orbit Earth, Carpenter spent nearly five hours testing equipment and taking photographs before splashing down (Credits: NASA).

Carpenter, who was the fourth American in space and the second to orbit the Earth, only flew in space once, but his mission in 1962 remains one of the most comprehensive scientific research missions ever flown in human spaceflight.  Mission Mercury-Atlas 7 (MA-7) required Carpenter to make astronomical observations, Earth observations, medical checks, and study visibility and flying abilities.  Carpenter orbited the Earth three times, piloting his Aurora-7 spacecraft 164 miles above the Earth’s surface at over 17,500 miles per hour (28,163 km/h), before splashing down in the Caribbean off the coast of Puerto Rico – some 250 miles (402 km) off of the intended target.

Fortunately Carpenter survived his trail blazing spaceflight in one piece, but most of America was on the edge of their seats when CBS news anchor Walter Cronkite announced that Mission Control had lost communication with Aurora 7.  Carpenter and his spacecraft suffered from a fair share of technical problems – a faulty pitch horizon scanner, low fuel, overheated fuses, and autopilot and automatic systems malfunctions. The numerous problems forced Carpenter to manually fly his spacecraft through reentry, proving a human pilot could overcome automatic systems malfunctions.

“I sat for a long time just thinking about what I’d been through.  I couldn’t believe it had all happened.  It had been a tremendous experience, and though I could not ever really share it with anyone, I looked forward to telling others as much about it as I could,” said Carpenter of his thoughts while waiting to be picked up in the ocean in the 1962 book ‘We Seven’.  ”I had made mistakes and some things had gone wrong, but I hoped that other men could learn from my experiences.  I felt that the flight was a success, and I was proud of that.” 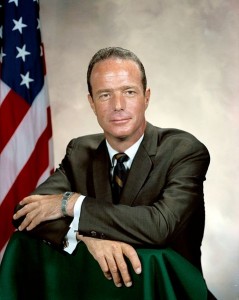 After Aurora 7, Carpenter took a leave from NASA to pursue more work with the U.S. Navy, this time at the bottom of the ocean. Carpenter was America’s first astronaut/aquanaut and spent 28 days living on the ocean floor off the coast of California for the Navy’s Sealab program.  Carpenter sustained an injury caused by a motorcycle accident in 1964, one which he never fully recovered from.  In light of his injury, and considering that he still did not regain mobility in the injured arm after two surgeries, NASA ruled Carpenter ineligible for spaceflight, and he resigned from NASA in 1967.  Carpenter retired from the U.S. Navy two years later with the rank of Commander.

I am frequently asked if I was afraid [regarding being launched into space]. Yes, I was afraid. But fear is neither shameful nor to be feared, it is to be respected; it does a lot of good things for you when things get dirty. It improves your vision, extends you peripheral vision, reduces reaction time, makes you stronger, and improves your endurance. It is a very valuable companion. What people, I think, are chary about here is that fear is the same as panic. But panic is uncontrolled fear – and that is deadly. But if you use fear, and control it, it can save your life. It can be a pistol! – Scott Carpenter