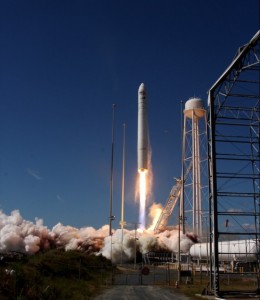 After a spectacular launch on Wednesday, 18 September, Orbital Sciences Corp. met with delay in the rendezvous and berthing of its ORB-D Cygnus craft at the International Space Station. That delay paid off in spectacular fashion with today’s successful berthing at the ISS (Credits: Jason Rhian / AmericaSpace).

Eleven days since its launch from Pad 0A at the Mid-Atlantic Regional Spaceport (MARS) on Wallops Island, Va., aboard the second Antares rocket, Orbital Sciences Corp. has triumphantly brought its first Cygnus cargo ship to an orbital meeting with the International Space Station (ISS). Watched closely by hundreds of controllers on the ground and six pairs of eyes from the Expedition 37 crew, Cygnus was grappled by the 17-meter-long Canadarm2 robotic arm at 7:02 a.m. EDT Sunday, as the space station flew high above the Indian Ocean. Grapple occurred 10 minutes prior to orbital sunset, and after more than an hour of checks the craft was berthed onto the Earth-facing (or “nadir”) port of the Harmony node at 8:44 a.m. The crew are expected to enter Cygnus early Monday.

Today’s successful capture of Cygnus—the only member of the station’s family of Visiting Vehicles to benefit from a Power & Data Grapple Fixture, whose latches and electrical connectors offer greater rigidity than the Flight Releasable Grapple Fixtures utilized by SpaceX’s Dragon and Japan’s H-II Transfer Vehicle (HTV)—comes at the end of almost two weeks of euphoria and frustration. Launched from Wallops Island with 590 kg of supplies and equipment on 18 September, Cygnus was expected to follow a four-day rendezvous profile to reach the space station and rapidly cemented its credentials. Before its mission was even two days old, it completed two of the 10 Demonstration Objectives assigned to this “ORB-D” (or “Demonstration”) mission. Cygnus tested its “Position and Control” capability to properly orient itself in space, deactivated its thrusters to operate in “free drift,” and performed a simulated abort maneuver.

However, as the cargo ship approached the ISS in the early hours of Sunday, 22 September, Orbital announced that the capture and berthing had met with delay. “Cygnus … established direct data contact with the International Space Station and found that some of the data received had values that it did not expect, causing Cygnus to reject the data,” the Dulles, Va.-based company reported on its website. “This mandated an interruption of the approach sequence. Orbital has subsequently found the causes of this discrepancy and is developing a software fix.” Initial hopes to accomplish a second rendezvous attempt on Tuesday, 24 September were abandoned, due to the impending launch and arrival of the Soyuz TMA-10M crew, and NASA and Orbital jointly decided that it was more prudent to wait until today for the next attempt.

In the meantime, the software fix was developed, tested, and uploaded to the cargo ship in readiness for the second rendezvous attempt. Approaching the space station from “behind” and “below,” Cygnus was tasked with performing a further eight Demonstration Objectives and showcasing its ability to hold position at various stages, before being cleared to enter the Keep Out Sphere, a virtual 200-meter exclusion zone around the multi-national outpost. Late Saturday night—as noted by astronaut Catherine “Cady” Coleman, the duty Capcom for today’s berthing, on her Twitter page—Cygnus was about 200 km behind the ISS and closing at a rate of about 24 kph. At around the same time, Orbital tweeted that its software patch had been successful and that a “good relative GPS solution” had been established with the space station.

Earlier this morning, NASA astronauts Karen Nyberg and Mike Hopkins, together with Italy’s Luca Parmitano—the members of the station’s U.S. Orbital Segment (USOS)—set Canadarm2 to work inspecting the Common Berthing Mechanism (CBM) on the nadir face of the Harmony node, ahead of Cygnus’ arrival. By 4:30 a.m. EDT, the cargo ship had completed four more of its Demonstration Objectives: (1) Relative GPS Navigation, (2) On-board Targeting, (3) Reaction Engine Assembly Maneuver, and (4) Command Cygnus Via HTV Command Panel. This ticked off a total of six out of 10 critical Demonstration Objectives which had to be satisfactorily completed in order for the rendezvous and berthing to go ahead. 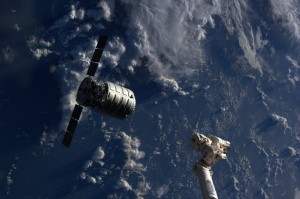 The Cygnus cargo spacecraft is just a few feet away from the International Space Station’s Canadarm2 (Credits: NASA).

Still left to complete were Lidar Navigation, Retreat, Position-Hold, and Lidar Tracking. The Lidar Navigation objective (No. 7) was ticked off the list by 4:50 a.m., slightly earlier than planned, with Cygnus’ lidar sensors locking on to the space station at a distance of 2,900 feet. Maneuvering by means of its hydrazine and nitrogen tetroxide thrusters, the ship drew steadily closer to its quarry. By 5:10 a.m., it had reached a distance of 820 feet—about 250 meters—and over the next few minutes was commanded by the Expedition 37 crew to complete Demonstration Objective No. 8. This required Cygnus to move closer to about 230 meters and then withdraw back out to 250 meters. The ship responded crisply to these commands and completed the Retreat (No. 8) and Position-Hold (No. 9) tasks with perfection. At length, at 5:30 a.m. Cygnus was holding its position at 230 meters.

From aboard the ISS, Luca Parmitano tweeted that he was happy to have been the first member of the crew to shout “There it is!” as the astronauts gained their first glimpse of Orbital’s beautiful baby swan. The most critical period of the rendezvous, however, came after 6 a.m. when NASA’s Mission Control Center in Houston, Texas, unanimously issued a “Go” to proceed into the Keep Out Sphere. Ten minutes later, creeping at less than 0.2 meters per second, Cygnus completed its 10th and last Demonstration Objective, by acquiring Lidar Tracking of the space station. “No issues” was the clipped summary of the demonstrations in an Orbital tweet. By 6:30 a.m., the cargo ship had reached a distance of 100 feet—about 30 meters—at which point it again held position for permission to proceed.

Shortly thereafter, following “Go/No-Go” polls at Orbital’s Mission Operations Center in Dulles, Va., and at NASA’s Mission Control Center, ISS Flight Director Courtenay McMillan gave authority for Cygnus to maneuver to a point about 35 feet—or 10 meters—from the station, within range of grapple by Canadarm2. With all events running well ahead of schedule, the grapple time was advanced by about 15 minutes from 7:15 a.m. to around 7 a.m. Deftly controlled by Nyberg and Parmitano, the Canadian-built robotic arm grappled Cygnus at 7:02 a.m., as the station flew high above the Indian Ocean, and a few minutes before orbital sunset 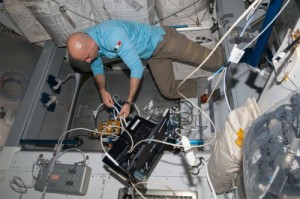 In the minutes after the successful grapple, Orbital tweeted a tribute to Cygnus’ namesake, former astronaut and senior company executive G. David Low, who died in 2008, with the words “This one’s for you!” Earlier this month, Orbital named the first Cygnus in Low’s honor, paying tribute to his enormous contribution in the Commercial Orbital Transportation Services (COTS) endeavor with NASA.

Actual physical berthing with the nadir port of the Harmony was expected to occur about two hours after the grapple, but was completed at 8:44 a.m. The two-part berthing procedure saw hooks from Harmony’s nadir Common Berthing Mechanism extend and grab Cygnus to pull the two CBMs into a mechanical embrace, after which a series of 16 bolts were driven into place to rigidize the two vehicles. This task was finished shortly after 9 a.m.

“This entire COTS demonstration mission has been executed in textbook fashion by the joint NASA and Orbital teams, from Antares’ launch 10 days ago to Cygnus’ berthing at the station this morning,” said Mr. David W. Thompson, Orbital’s President and Chief Executive Officer. “A tremendous amount of hard work has gone into this five-year effort from our launch vehicle and spacecraft teams, and we are all exceptionally proud of their accomplishments. We look forward to moving ahead with regularly scheduled ISS cargo delivery missions for NASA as early as the end of the year.”

As described in AmericaSpace’s ORB-D preview article, today’s berthing heralds the start of the COTS Demonstration Mission, which both Orbital and SpaceX were required to complete satisfactorily, before either of the two companies could progress with a series of Commercial Resupply Services (CRS) delivery flights. Under the provisions of a $1.9 billion contract, signed with NASA in December 2008, Orbital will launch eight more Cygnus missions by 2016, delivering a total of 20,000 kg of payloads to the ISS. Assuming that the month-long ORB-D flight goes well, the first dedicated CRS mission—known as “ORB-1″—may launch toward the station as early as 8/9 December.

Early tomorrow (Monday), the Expedition 37 crew are expected to remove a section of Multi-Layered Insulation and open the hatch into Cygnus’ Pressurized Cargo Module. At first, they will wear goggles and face masks to guard against the presence of particulate debris in the cargo ship’s atmosphere and will spend the next several days unloading Cygnus’ 1,300 pounds of supplies, consumables, and equipment. Present plans call for Cygnus to remain attached to the ISS until 22 October, whereupon it will be unberthed by Canadarm2 and destroyed in the upper atmosphere.

Miss the event? Watch the recap! Courtesy of NASA TV:

Image caption: The Cygnus commercial resupply craft is installed by the Canadarm2 to the Harmony node (Credits: NASA).