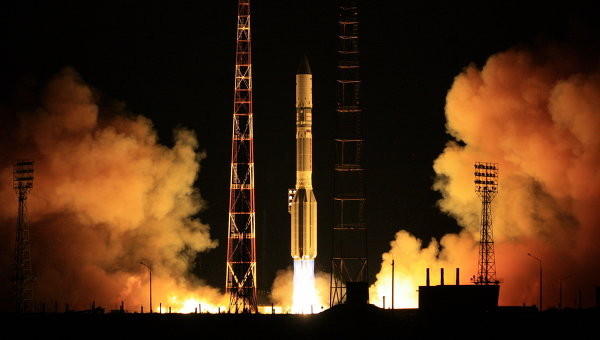 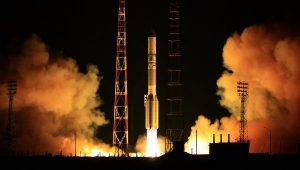 The December 8 launch of yet another ill-fated Proton-M with Breeze-M upper stage (Credits: RIA Novosti).

On December 8 at 17:13 Moscow time, a Proton-M rocket with Breeze-M upper stage launched from Baikonur Cosmodrome carrying Yamal-402, a communications satellite built by Thales Alenia Space for the Russian-owned Gazprom company. Instead of announcing successful separation nine hours later, International Launch Services (ILS) found itself announcing an anomaly: “Preliminary flight information indicates that the 4th and final burn of the Breeze-M engine ended about four minutes early and subsequently separated [from] the spacecraft.”

It seems that it was not just the final stage that was anomalous. The three preceding maneuvers and external tank separation had been concluding increasingly earlier than scheduled, Anatoly Zak reports. The result: Yamal-402 was placed in a perigee of 3,100 km instead of the intended 7,470 km. It is reported that the apogee is pretty close to the intended 35,696 km and two maneuvers executed by the satellite’s own propulsion system may be sufficient to place it in an operational orbit. The maneveurs are expected to reduce Yamal-402’s operational life by about four years.

This is the third Breeze-M failure Khrunichev has suffered in the past 16 months. The space industry restructuring prompted by the last incident has not even begun, while a new investigation is being opened into the latest Breeze-M disaster. “In parallel with the State Commission, ILS will form its own Failure Review Oversight Board (FROB),” said international Proton marketer ILS in a statement. “The FROB will review the commission’s final report and corrective action plan, in accord with U.S. and Russian government export control regulations.” Fortunately, it is unlikely that a debris event will occur this time around, unlike the October 16 explosion that followed an August 6 Breeze-M failure.

Proton manufacturer Krunichev executed three successful launches between the two most recent failures, but that is unlikely to reassure Mexican satellite operator Satmex, whose December 28 launch will almost certainly be postponed. Satmex’s business is already on shaky ground, and inability to put Satmex 8 in place before Satmex 5 runs out of fuel in May 2013 could ring the company’s death knell. Satmex 5 was launched in 1998 and lost its backup propulsion system several years ago.

Below, a report on the launch: