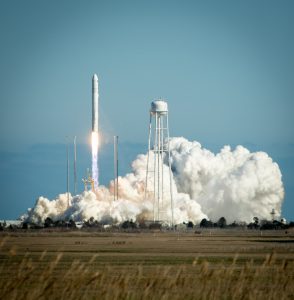 Antares carried a 3,800-kilogram mock version of the Cygnus cargo capsule on this maiden test flight.  The dummy payload has been integrated with sensors to collect real data from the launch.  Orbital confirmed that the mockup will orbit for at least two weeks before burning up during atmospheric reentry.  Antares also carried three nanosatellites, part of NASA’s Phonesat project to test commercial smartphone electronics in space.

Since the initial thrust-to-mass ratio of the rocket was about 1.2:1, the two-stage rocket’s early acceleration was slow.  After the ignition of the engines, Antares did not lift off from the pad for two full seconds.  At T+10 seconds, the rocked was accelerating to about 64 km/h and climbed to a 70 meter altitude.  The vehicle reached a velocity of 160 km/h and 381 meter altitude at T+20 seconds, remaining in subsonic even 60 seconds after the ignition, when it was travelling at 740km/h at about 5 kilometers in altitude. Antares achieved Mach 1 about 75 second after lift-off. Stage 1 engine shutdown happened about 3 minutes and 50 seconds after the lift-off and the rocket took another 4 minutes to reach orbit at 250 km, moving at about 27,360 km/h.

The successful liftoff came after two delays caused by a minor mechanical glitch on April 17 and bad weather on April 20. The first attempt was postponed when an umbilical data line to the second stage came loose at T-12 minutes. The Orbital team investigating the glitch determined the cause was a combination of slight hydraulic movement of the Transporter Erector Launcher (TEL) and not enough slack left in the umbilical to allow for any additional or unplanned movement.  After small adjustments to both the hydraulics on the TEL and to the umbilical, the launch was initially rescheduled on April 19, but it was postponed to April 20 due to deteriorating weather conditions.  The mission was scrubbed again on April 20 due to high upper level winds before finally taking place the following day.

According to Orbital Sciences, Antares will be launched  two more times this year. The first launch will be a demonstration mission to the International Space Station, likely to take place in June.

Below, Antares’ launch from Wallops Flight Facility on April 21 (Courtesy of NASA TV).