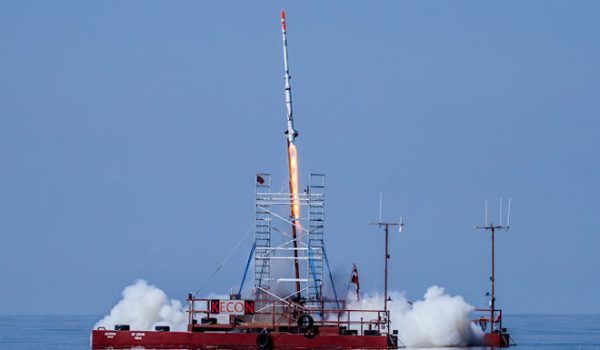 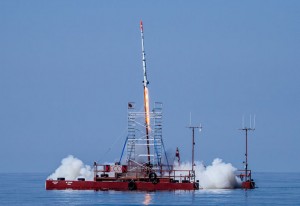 On July 27, the DIY organization Copenhagen Suborbitals launched SMARAGD-1 from the Baltic Sea. After a couple false starts, when a boat wandering into the safety range and then the payload ran out of power and had to be recharged, SMARAGD-1 made a beautiful lift off. Landing was less beautiful, with the nose cone snapping off after stage two separation.  “The payload nose cone broke off leaving the rocket with a flat front and a crazy trajectory,” said founder Kristian von Bengtson.”Without a nose cone we lost trajectory data and video and no real idea of where it went and how high it flew.”

The launch of the unmanned two stage SMARAGD-1, whose name means emerald, was designed to test communication and separation systems that the organization will need for its crewed spacecraft. In addition to the many challenges  Copenhagen Suborbitals faces in its quest to launch a man into suborbital flight using homemade equipment, the organization also strives to use the least toxic materials possible in its launch vehicle design. This includes everything from the propellants – currently they are exploring epoxy resin/nitrous oxide – to the copious smoke-inducing sorbitol used for separation and stage ignition. The choice of materials makes for increased operational complexity, but the group says they would rather that than have to manage hazardous material storage and handling.

Copenhagen Suborbitals was founded in 2008 by von Bengtson and Peter Madsen with the goal of launching themselves into space. The group has grown considerably, fueled by volunteers, sponsorships, and donations, and is making steady progress on its  construction of the Tycho Deep Space Capsule, whose novel design features a standing position for its single crewmember. The first half of this year saw extensive testing of the capsule’s parachute, including a manned test in June.

Copenhagen Suborbitals is next looking to test an active guided rocket. A test launch of the capsule Tycho Deep Space and its launch escape system is scheduled for August 10-12. As von Bengtson said in his latest blog post “I hope we will get ready, but I am not so sure just yet.”

Below is a video of the SMARAGD-1 launch: