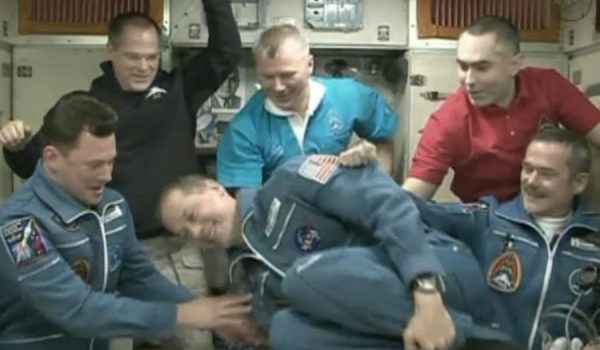 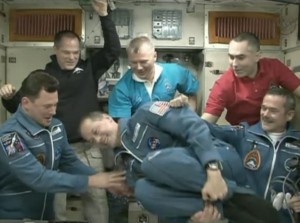 On December 21, the second half of International Space Station Expedition 34 joined their crewmates after two days travelling aboard their Soyuz TMA-07M. Astronauts Chris Hadfield and Tom Marshburn and cosmonaut Roman Romanenko docked at 1409 GMT, opening hatches at 1637 GMT.

“I love what you’ve done with the place,” Hadfield told current residents Commander Kevin Ford and Flight Engineers Oleg Novitskiy and Evgeny Tarelkin as they all exchanged hugs. Hadfield, Marshburn, and Romanenko are all repeat visitors to the station. 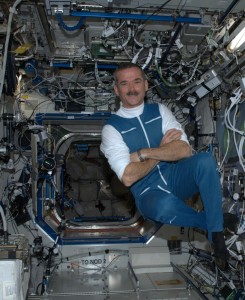 “Space Station! Floating free, buoyed up even more by my smile” tweeted Chris Hadfield in his first message from space.

Calling to check in with mission control and their waiting families, the spacefarers first had to alleviate the curiosity of their offspring. Hadfield’s son Kyle (aged 29) wanted to know why his face was so puffy – a common side effect of life in microgravity where internal fluids redistribute throughout the body – as well as to ask his father’s permission to get a pony (“Ask you mother,” Hadfield responded). Marshburn’s daughter immediately requested an acrobatic display and the astronaut was happy to work out his space legs with a quick spin.

Hadfield in particular is garnering a lot of attention this trip, with patriotic Canadians celebrating his appointment as the first Canadian commander of ISS – a role he won’t take on until Expedition 35 begins in March. “All of Canada tuned in to watch that absolutely picture-perfect launch,” Paul Engel, the Canadian Space Agency’s communications lead told the crew. But Hadfield is taking every opportunity to use the attention to interest more people in space. Working in concert with his son Evan (aged 27), he has been organizing live chat sessionson reddit.com – he hopes to host one while he’s in space – and is an active tweeter. As Evan Hadfield, who goes by the name “DoctorNose” on reddit, put it when publicizing his father’s first chat: “We treat it nowadays like going to the space station is commonplace.

Send a postcard to the ISS crew to wish them happy holidays, courtesy of NASA.

Society doesn’t even bat an eye that humans live in space. To me that is stunning. But, that’s life.” Hadfield and his colleagues are doing all they can to reintroduce the magic.

Meanwhile, with the ISS crew preparing to spend Christmas and New Years in the midst of the experience of a lifetime, but still away from their families, NASA is offering the public the opportunity to help the crew to some holiday cheer. “Go ahead, make their day,” NASA says, providing four digital postcards that can be customized and sent to the ISS crew.