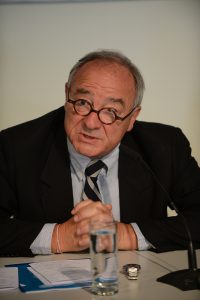 The Director-General of the European Space Agency (ESA) says it is urgent and time for ESA’s 20 member governments to decide on the development of the next-generation Ariane rocket, irrespective of a decision to complete development of an upgraded Ariane 5 launcher.

The question of whether to complete development of the Ariane 5 Midlife Evolution (ME) rocket or bypass Ariane 5 ME and begin immediate investment in full-scale development of Ariane 6 launch vehicle is a contentious one. The issue has been at the heart of European space policy for 20 years, and Director-General Jean-Jacques Dordain’s weighing in on the side of a complete Ariane overhaul is likely to be just as contentious.,

“Do we have to decide on a new-generation launcher now?” Dordain asking the question that France and Germany, ESA’s two biggest financial contributors, are still at loggerheads over it. “I say yes. I strongly believe we have to decide, as quickly as possible, to develop a new-generation launcher to be competitive in the market as it is forecast, and with the competitors.”

Dordain made the comments regarding Ariane development on 11 September 2012 at a press conference in Berlin during Germany’s ILA Air and Space Show.

ESA’s member states will meet in late-November at a conference to set Europe’s space policy and budget priorities. Member states will debate and decide on a forward looking action plan on the Ariane rocket.

The current powerful Ariane 5 heavy-lift vehicle that carries piggybacked satellites weighing more than 10,000 kilograms to geostationary transfer orbit and over 20,000 kilograms into low Earth orbit.   Complete development of Ariane 5 ME would increase the vehicle’s payload-carrying power by 20 percent and improve efficiency of the reignitable upper stage. Ariane 6 would have a design and a payload-carrying capacity for single satellites weighing from 2,500 to 6,500 kilograms, which could be increased to 8,000 kilograms.