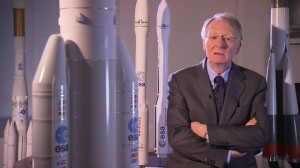 The European Space Agency (ESA) has replied to the criticism moved by the Air and Space Academy about the Ariane 6 design, on June 7.

“We have done these trade offs over the past year or so and we went to our ministers with a specific design that they approved,” said Antonio Fabrizi, ESA Launch Vehicle Director to Space News. “We are now refining the specifics of it, but we cannot go against a design that has the endorsement of our ministers. We are moving according to plan and we are no more than a couple of weeks behind the schedule we set last November.”

Although the criticism came from former ESA and European industry experts, Fabrizi is confident in the design with two solid-fueled stages topped by a cryogenic upper stage, approved during the Ministerial Council. Fabrizi added that the last word on the design will be given only in July, when ESA and CNES are going to decide whether the final configuration for Ariane 6 will feature a single-block first stage or a multi-block cluster.

Once the Ariane 6 design specifications are frozen, ESA and CNES will issue a request for information to European industry, followed by more formal requests for bids on the new launcher’s components. The received bids will be evaluated by the end of the year and after that, ESA will start a delicate process to provide geographical return. ESA will ask the governments where the winning bidders are located to invest in Ariane 6 according to the participation of their domestic industry. The final decision is expected during the next conference of ESA ministers, in late 2014.

According to Fabrizi, despite France was pushing for Ariane 6, Germany is likely to assume the leadership of the cryogenic upper stage development, with a total 20/25 percent of the total industrial share. During the Ministerial, Germany was not convinced by the Ariane 6 proposal, instead backing the enhancement of the heavy lift Ariane 5.

Fabrizi also said that ESA will propose to consider the implementation of a longer or larger fairing for the current Ariane 5. The modification will permit the accommodation of two commercial telecommunications satellites, whose size is increasing year by year.