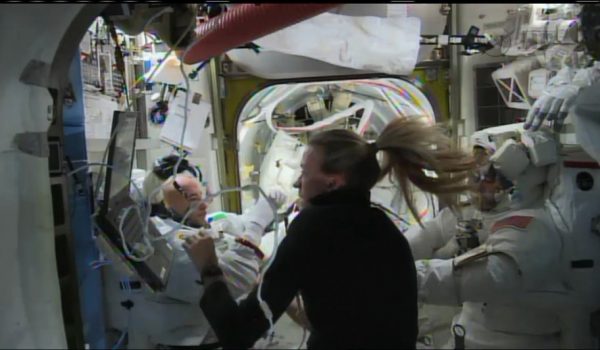 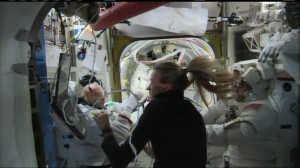 Karen Nyberg helps Parmitano to take his helmet off as soon as he’s back on board (Credits: NASA TV)

Mission Control decided to end early the July 16 spacewalk with astronauts Chris Cassidy and Luca Parmitano, after the latter reported water floating behind his head inside his helmet.

“There is some [water] in my eyes, and some in my nose,” Parmitano said during the live coverage of the spacewalk. “It’s a lot of water.”

Although the water was not an immediate health hazard for Parmitano, NASA Flight Director David Korth did not have any doubt in ordering the extravehicular activity (EVA) to end early. Parmitano went straight back to the airlock followed by Cassidy, who stayed behind to do a quick clean-up. The excursion outside the International Space Station (ISS) ended after 1 hour 32 minutes instead of the planned 6.5-hour EVA. Back inside the airlock, the astronauts began repressurizing the chamber in order to return inside the station. Parmitano could not hear the radio because of the water and Cassidy had to reassure Mission Control that the Italian astronaut was fine. “He looks fine,” Cassidy said. “He looks miserable, but okay.” Once inside the station, Parmitano was helped by the crew to quickly remove his helmet and suit in an expedited doffing procedure. To show how difficult it is to get the spacewalkers back inside, it took about 32 min from the EVA termination decision to Parmitano’s helmet coming off. The crew estimated that 1-1.5 liters of water had been released into his suit.

In a press conference about the event later the same afternoon, NASA officials indicated that while the EVA was brought to a speedy conclusion with expedited reentry and doffing, it is possible to complete those steps even faster in case of a life-threatening situation. While this incident was considered to be very serious, and choking and drowning were real possibilities, Mission Control did not feel it necessary to expedite to that degree. Parmitano is now reported to be doing well and to have suffered no medical fall-out from his misadventure.

Cassidy told Mission Control that according to Parmitano, the water clearly did not taste like normal drinking water. This could indicate that there were traces present of the anti-fogging agent from Palmitano’s helmet or possibly water from the coolant system, which is treated with iodine. The drinking bag, while the initial focus of investigations, was quickly ruled out as a likely culprit. The cooling and ventilation system may be more likely; it holds 3.8 liters of water, while the drinking bag holds just short of 1 liter. While engineers will try to find the cause of the leak, mission managers are working to identify when the unfinished tasks planned for the spacewalk will be completed. The EVA was planned to complete a number of tasks in preparation for the arrival of a new Russian Multipurpose Laboratory Module later this year.  In addition, Cassidy and Parmitano would have replaced a video camera on the Japanese Exposed Facility experiment platform and a number of other minor tasks, although none of them is urgent.

NASA reported that this spacewalk was the second shortest in ISS history after the 14-minute EVA in 2004 when astronaut Mike Fincke had a pressurization problem in his oxygen tank.

Below, Palmitano and Cassidy discuss the problem with Mission Control before their EVA is terminated (Courtesy of NASA TV).