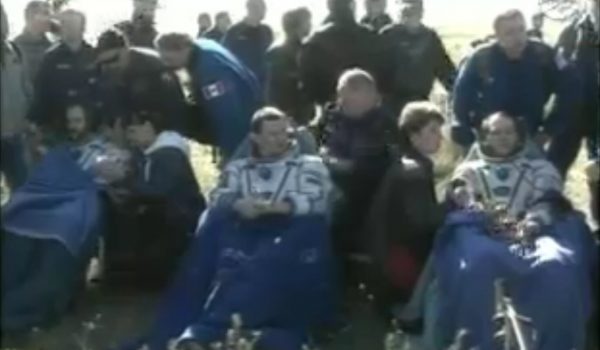 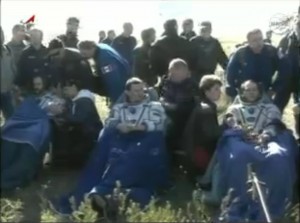 Expedition 35, composed of Canadian Chris Hadfield, American Tom Marshburn, and Russian Roman Romanenko, has safely touched ground in Kazakhstan as of 2:31 GMT, on May 14 after 146 days in orbit aboard the International Space Station (ISS).

“For me this was just a personification of what the International Space Station is, and what the people mean to it,” said former ISS Commander Hadfield. “This is a human research vessel. We’ve shared it with millions of people around the world, and we’ve done our absolute best to accomplish the work on board.”

The journey back to Earth began 3.5 hours before the landing, when the Soyuz TMA-07M spacecraft undocked from the orbital laboratory, officially marking the end of Expedition 35 and the beginning of Expedition 36.  After moving a short distance from the station, the Soyuz engines fired for 15 seconds to remove the capsule out of ISS’ orbit.  The spacecraft’s engine ignited again after 2.5 hours for the de-orbiting burn, to brake from space and enter into Earth’s atmosphere.  Before reaching the top of the atmosphere, Soyuz’s descent module separated, orientating itself to point the ablative heat shield in the Earth-facing direction.  The parachutes then were deployed at an altitude of 10 km to slow down the capsule.  The descent and landing in Southern Kazakhstan completely nominal. The crew arrived safely on a beautiful sunny day, to be picked up by Russian recovery forces accompanied by NASA and Canadian Space Agency personnel. The capsule was originally observed to land upright, but was tipped over by the time the crew were extracted.

During Expedition 35, two spacewalks were successfully conducted.  The latest, performed by Chris Cassidy and Marshburn, came just before the departure, to replace a leaking cooling system, on May 11.  Earlier, cosmonauts Pavel Vinogradov and Romanenko ventured outside for a scheduled maintenance and change the ATV target on the Zvezda module.  The crew welcomed also a Progress cargo spacecraft and SpaceX Dragon capsule in March.  In addition, Commander Hadfield, Canada’s first space station commander, carried out an impressive outreach work, sharing pictures from the station and recording two songs and a number of videos about life in space, ultimately becoming a real social media celebrity.

Hadfield handed over the command to Vinogradov, who remains in orbit  along with American astronaut Chris Cassidy and Russian cosmonaut Alexander Misurkin until late May.  Three new crew members will join them soon on ISS: Russian Fyodor Yurchikhin, American Karen Nyberg, and Italian Luca Parmitano from the European Space Agency, on his first flight.