The European Gravity field and steady-state Ocean Circulation Explorer (GOCE) satellite finally returned to Earth on November 11, burning in the atmosphere at 80 km of altitude over the Atlantic ocean, near the Falkland Islands.

Although the spacecraft was “passivated” over a month ago, it maintained communication with ground stations and its sensors kept on recording the status of the instrumentation while the satellite was approaching its dramatic end.  The last contact with GOCE was made from the Troll station, in Antarctica at 24:42 CET. At an altitude certainly less than 120 km, with a central computer temperature at 80°C and battery at 84°C, the satellite was surprisingly still functional. The data gathered each passage over the ground stations by GOCE’s sensors were extremely valuable in adjusting the reentry prediction and excluding any risk of debris falling in populated areas. According to ESA officials, GOCE was expected to disintegrate at an altitude of about 80 km. The risk to the population on ground was anyway almost completely excluded by Prof Heiner Klinkrad, Head of ESA’s Space Debris Office at European Space Operation Centre, in Darmstadt, Germany:

“Statistically speaking, it is 250,000 times more probable to win the jackpot in the German Lotto than to get hit by a GOCE fragment. In 56 years of space flight, no man-made space objects that have re-entered into Earth’s atmosphere have ever caused injury to humans.”

In other words, Klinkrad said that the odds of being hit by a piece of GOCE’s reentering debris was 1 in 34,750,000,000,000. For the sake of comparison, according to National Geographic the odds of being struck by a lighting in U.S during a lifetime is 1 in 3,000.

How is that possible? First of all, oceans cover the 71% of the Earth’s surface, leaving plenty of human-free reentry areas for a satellite. Secondly, even if we consider the surface not covered by oceans, the percentage of land occupied by human population is relatively and surprisingly small. There are deserts, steppes, forests, and other terrains that are sparsely populated if not completely uninhabited.  In addition, especially for uncontrolled reentry, satellites are nowadays built in order to guarantee a partial or even complete burn-up while passing through  the atmosphere. In the case of GOCE, according to Klinkrad, only a small fraction of the initial spacecraft mass – about 20% or 200kg – reached the surface. This mass was anyway distributed across dozens of fragments, spread over a reentry ground swath. Other spacecraft such the Automated Transfer Vehicles are deorbited in controlled spectacular reentries over the Pacific Ocean.

GOCE in the News 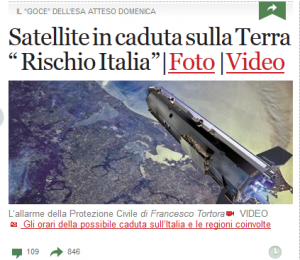 Like UARS and Phobos-Grunt, GOCE’s reentry made it to the headlines of principal media, probably for the wrong reasons, though. It is well known how difficult it is to precisely predict where and when an uncontrolled reentry will happen. Only with a few orbits left do the predictions usually become more refined. Due to solar activity, the upper atmosphere can expand creating more drag at low-orbiting altitudes, greatly influencing the final hours of an uncontrolled spacecraft. The difficulty in predicting where and when GOCE would have encountered its fate has fuelled traditional media, which seem to enjoy highlighting the limits of current science and engineering more than remarking the achievements of a challenging but flawless and exciting mission such as GOCE’s has been. However, this time the European Space Agency, maybe mindful of the reaction caused by UARS and Phobos-Grunt reentries, clarified almost immediately that there was no risk for anyone and, in general, it worked. Journalists and people are becoming more aware about space debris and the related risks although probably some have overreacted.

The Italian emergency management agency, Protezione Civile, issued a press release on November 9 in which, although stating the risk was remote, it advised to population to “stay at home” during the passages of GOCE above Italy. The concerning and alarming press release made the headlines of the main news websites for one day.

How was GOCE’s reentry reported in your country? Tell us in the comments!