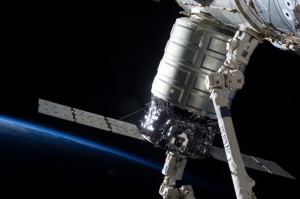 With opening comments starting at 11:30 a.m. EST, the trio were joined by Alan Lindenmoyer, the head of NASA’s Commercial Program, Phil McAlister, the director of Commercial Spaceflight Development with NASA and Frank Slazer the vice-president of Space Systems, Aerospace Industries Association.

“More than two years ago at the end of the space shuttle program two American companies, SpaceX and Orbital Sciences Corporation began work to restore the US’ capabilities in terms of delivering and returning experiments and supplies to the International Space Station, and in so doing – decrease our reliance on foreign launch service providers,” Bolden said during opening remarks at the conference. “Their successes mark the conclusion of NASA’s Commercial Orbital Transportation Services or “COTS” program. They are now clear to begun providing regular transportation services to the ISS.”

Those watching NASA Television were probably a little confused as the space agency had listed the news conference as “Completion of the Commercial Crew and Cargo Program.” Given that commercial crew has yet to launch an astronaut and that commercial cargo is still ongoing under NASA’s Commercial Resupply Services (CRS) contract – it was unclear why the announcement was labeled as such.

COTS was incredibly successful with two separate launch vehicles and spacecraft being developed under this initiative. It also served to return the capability of launching cargo from U.S. soil, something which has been lacking since the last space shuttle mission, STS-135 on space shuttle Atlantis, concluded in 2011. COTS was never planned to be a program in which new technologies were to be tested. Rather, it was one designed to validate designs that could replace a portion of the shuttles’ up mass (the amount of cargo delivered to orbit) capabilities.

“We weren’t looking at developing new technology under this program, rather we were looking at utilizing existing technology and I think that COTS has shown that this model works very well,” Lindenmoyer said. “What we’ve shown with COTS is that, while this isn’t the right model to do everything we do at NASA, it certainly is a model that works. I think we made the right choice!’ 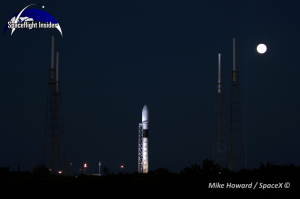 SpaceX has greatly benefited from its relationship with NASA. The company’s president, Gwynne Shotwell, stated that the company’s programs would not be as far along as they are without the agency’s support (Creditz: Mike Howard / SpaceX).

Today’s conference also served as an awards ceremony of sorts with Lindenmoyer, Shotwell and Culbertson each receiving NASA Group Achievement Awards on behalf of the teams/companies that they represent. They were presented with these awards from for their efforts on NASA’s commercial programs.

Orbital’s Frank Culbertson also revealed the name of the next Cygnus spacecraft which will fly to the International Space Station – the C. Gordon Fullerton. That mission is currently slated to launch on Dec. 8, 2013. Fullerton, like Low, was a shuttle astronaut, he piloted the B-52 Stratofortress which deployed a Pegasus rocket in 1991. Fullerton passed away in August of this year.

Culbertson’s announcement was just one expression that highlighted the emotions tied to COTS.

“As an engineer I normally talk about the technical aspects a program, with the close of COTS, I’d like to go outside that and talk about the pride that I feel with the combined team and what they’ve produced,” McAlister said. “I’m also proud of NASA, we haven’t always been a good partner in the past, but with COTS we have been. Both companies have different cultures, different ways of doing things. We normally wouldn’t be flexible, but here we were, here we allowed them to do things their way and to succeed.”

Bolden highlighted that COTS was a program which had received support from both sides of the political spectrum, mentioning that both the Bush and Obama administrations had sponsored the effort. 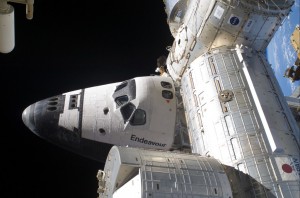 Since the last space shuttle mission in 2011, NASA and its commercial partners have been working to allow to provide some of the capabilities offered by the shuttle fleet in a timely, affordable fashion (Credits: NASA).

COTS was announced on January 18, 2006. The two initial competitors were SpaceX and the failed aerospace firm Rocketplane Kistler (RpK, as it was known, filed for Chapter 7 bankruptcy in 2010). Shortly after RpK’s termination and departure in 2008 – NASA signed an agreement with Orbital to compete in COTS. These companies were the elite, as more than 20 aerospace firms submitted proposals under the COTS initiative.

The first COTS mission was conducted by SpaceX in a fashion that surprised some within the space community. Initially, there were supposed to be two flights to the ISS, with the first only rendezvousing with the station and the second being grappled by the station’s Canadarm 2 and berthed to the orbiting laboratory. However, SpaceX petitioned and received approval from NASA to combine these two missions. This allowed SpaceX to complete the objectives under COTS 2 and 3 in a single mission.

“The COTS program was a great success — not only for NASA and the commercial space industry, but also the American taxpayer,” Shotwell stated in a NASA release issued during the conference. “Together, NASA and SpaceX restored cargo transport capabilities to the United States and also laid the foundation for the future transport of American astronauts. SpaceX appreciates NASA’s ongoing support and is honored to partner with them in these efforts.”

For its part, Orbital began working under COTS later than SpaceX and flew the first demonstration flight of its Antares launch vehicle in 2012. Just this past September, the Dulles, Virginia-based company completed its first COTS mission to the ISS, thus closing out the program. 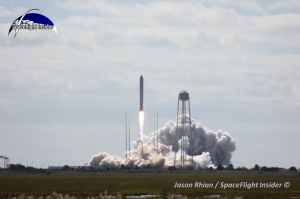 With the successful launch of the first Cygnus spacecraft and subsequent launch to the International Space Station, the COTS program has come to a close. Both companies are now working under NASA’s Commercial Resupply Services contract (Credits: Jason Rhian / SpaceFlight Insider).

“Orbital’s successful completion of the COTS program, including two launches of the new Antares rocket and the first mission to the International Space Station by the Cygnus cargo logistics spacecraft, was the direct result of the outstanding collaboration between the NASA and Orbital engineering and program management teams,” said Frank Culbertson, Executive Vice President and General Manager of Orbital’s Advanced Programs Group. “The unique structure of the COTS initiative, under which NASA’s technical expertise, experienced human spaceflight workforce, and well-honed safety operations standards provided the overall framework, enabled Orbital to bring the energy, innovation and discipline of the commercial sector to the program, resulting in a reliable and cost-effective resupply service.”

Both of these two companies will deliver various forms of cargo to the ISS under CRS. Orbital has signed a $1.9 billion contract for these services with SpaceX receiving $1.6 billion.

“America’s best days in space exploration are ahead of us thanks to the grit and determination of those in government, and the private sector, who dare to dream big dreams and have the skills to turn them into reality,” Bolden said. “We’ve ended the outsourcing of space station resupply work and brought those jobs back home to America. The commercial space industry will be an engine of 21st century American economic growth and will help us carry out even more ambitious deep space exploration missions.”