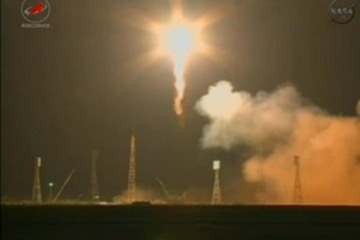 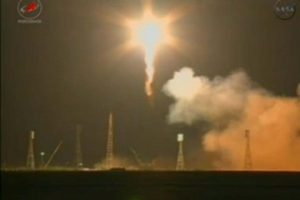 Progress spacecraft are disposable Soyuz vehicles designed in 3 segments with a propellant module instead of the central crew return capsule used on the manned Soyuz vehicle.

The cargo ship delivered nearly 3 tons of fresh food, water and equipment to the 6 men of the ISS crew, who are currently under the command of NASA astronaut Kevin Ford.  Specifically, the Progress spacecraft delivered 346 kilograms of propellant, 50 kg of oxygen and air, 420 kg of water and 1, 360 kg of spare parts, science gear and other supplies.  The spacecraft flew on an accelerated schedule, reaching the ISS in 3 hours, instead of the 2 days usually taken by the unmanned cargo ship to complete the trip.

Progress vehicles, like similar robotic resupply spacecraft from Europe and Japan, are designed to be disposable and are intentionally destroyed as they enter the atmosphere during de-orbiting at the end of their mission.  On February 9th, the previous cargo ship, Progress 48 was detached from the ISS in order to make room for Progress 50.  The outgoing Progress vehicle was filled with tons of trash and unneeded items to be burnt up into the atmosphere.

SpaceX’s Dragon capsule is the only robotic supply vehicle that can return back to Earth by means of its heat shield, designed to protect during re-entry.   Dragon space capsules have already visited the space station twice in 2012, with the next trip scheduled to be launched in March 2013.

The Dragon capsule will be followed in April by the 4th Automated Transfer Vehicle (ATV), the penultimate European supply cargo ship.

Below, Progress 48 resupply ship undocking from ISS on February 9th: