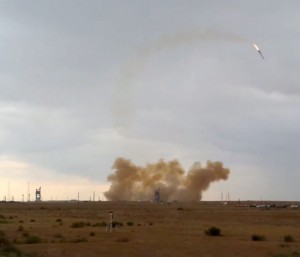 It appears a likely culprit of the July 1 Proton-M launch failure has been discovered. In the first English-language report, Anatoly Zak of RussianSpaceWeb, relates that investigators combing through wreckage from the crash discovered that the angular velocity sensors known as DUS were installed upside down.

“Each of those sensors had an arrow that was suppose to point toward the top of the vehicle, however multiple sensors on the failed rocket were pointing downward instead,” says Zak. “As a result, the flight control system was receiving wrong information about the position of the rocket and tried to ‘correct’ it, causing the vehicle to swing wildly and, ultimately, crash.”

The unit was apparently installed by an inexperienced technician. “It appeared that no visual control of the faulty installation had been conducted, while electrical checks had not detected the problem since all circuits had been working correctly,” says Zak.

There may have been additional problems with the flight, since faulty installation of the DUS would not seem to explain the apparent engine fire at liftoff.

It now appears that the three GLONASS-M satellites that burned up with their launch vehicle were not insured. Russia has announced plans to launch two replacement satellites this fall from the Plesetsk Cosmodrome.