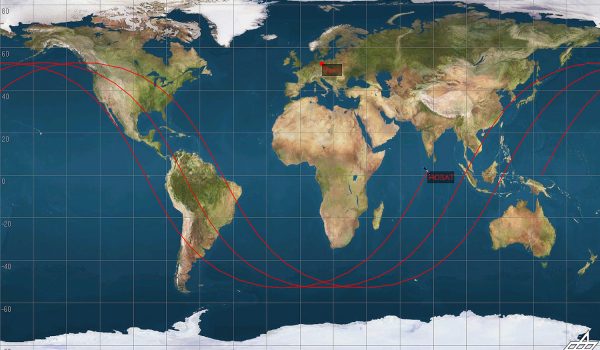 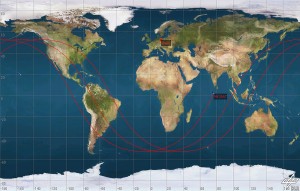 The massive German Roentgen Satellite (ROSAT) is expected to make its final dive into Earth’s atmosphere in the next 24 hours. According to German space agency DLR, the time and location of re-entry cannot be predicted precisely: the actual time depends in fact by several factors, like the aerodynamics of the tumbling spacecraft body and the dynamics of the upper layers of the atmosphere, influenced by solar activity.

The satellite is expected to break up, but up to 30 large pieces could potentially make it to the ground or cause disruption in air traffic. The optics of the orbiting observatory have in fact been designed to be heat resistant, a design feature that may create, in the satellite’s end of life, up to 1.7 metric tons of falling debris. The ROSAT satellite is a 2.5 tons  X-ray telescope, which studied radiation from stars, nebulas, black holes and supernovas. 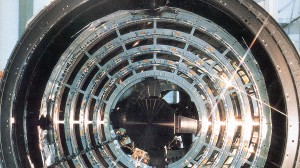 The ROSAT system of mirrors, composed by four nesting Wolter mirrors with a focal length of 2.4 meters.Each of the ring-shaped mirrors measures 50 centimeters in length, and the largest has a diameter of 84 centimeters - (Credits: MPE).

Launched in June 1990, it was developed by a joint venture between Germany, the United States and the United Kingdom. This framework of international cooperation would create a number of  complex legal implications, in case of damages to persons of properties. The satellite was decommissioned in February 1999, after a malfunction that prevented its recovery. The satellite is completely inert, so there is no way either to control its reentry, or to communicate with it to pinpoint its position with accuracy.

Just a month ago, on September 24, the larger NASA Upper Atmosphere Research Satellite (UARS) reentered over the Pacific Ocean, fortunately without consequences. ROSAT debris could be scattered along a 80-kilometer swath of the Earth’s surface, following a track that  reaches from the latitudes of 53 degrees north to 53 degrees south,in an area that stretches from Canada to South America. According to DLR officials, there is 1-in-2,000 chance that someone somewhere on Earth will be struck by ROSAT debris.

You can see some pictures of the ROSAT satellite taken from the ground by Ralf Vandebergh. Also recommended, “Has Anyone been Hit by Space debris?” In the video, below, a reconstruction of the reentry and disintegration of the satellite.