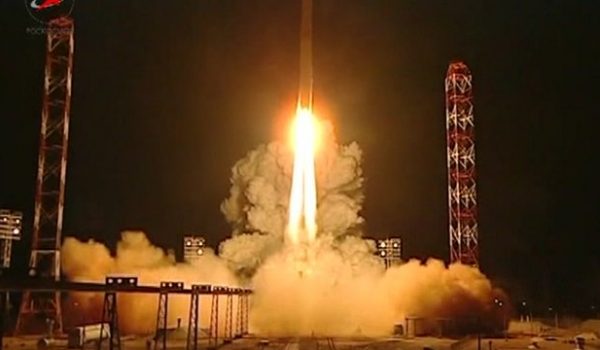 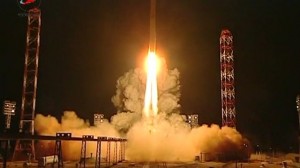 After a successful launch from Baikonur Cosmodrome on November 8, the unmanned Phobos-Grunt probe failed to fire its boosters to achieve the intended orbit.

“They say there is hope to reset it, apparently it’s a problem with the programming but there is very little time,” the lead mission scientist Alexander Zakharov of the Space Research Institute told Reuters. Russian space agency chief Vladimir Popovkin reported that technicians have three days to restart the on-board engine and correct the probe’s trajectory before battery power is exhausted.

“I feel grief,” says Zakharov. “It’s very sad that this is how it all worked out but this is a consequence of our lack of people after such a big interval… Many young people worked on this. There is a lack of experience, we are working almost from scratch.” 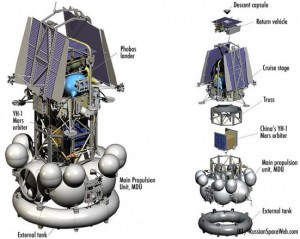 An exploded view of the Phobos-Grunt spacecraft (Credits: RussianSpaceWeb.com).

The primary purpose of the 15-ton unmanned probe, operated by the Russian Federal Space Agency, is to land on the Martian moon Phobos, and return a sample of its soil to Earth. The spacecraft is scheduled to arrive at Mars in the fall of 2012, and will drop a lander onto the surface of Phobos several months later. The lander will scrape soil from the moon’s surface, to be returned to Earth by 2014 in a return spacecraft. The portion of the lander to remain behind on Phobos will make measurements and observations of the moon’s surface.

The $163 million mission aims to help scientists learn more about the early solar system, as Phobos is believed by many astronomers to be a captured asteroid. It is of in particular interest as it could contain not only samples formed in the early stages of the solar system, but also materials blasted off the surface of Mars by ancient asteroid impacts. Also carried on the probe is a capsule containing microbes, to test the effects of long-term exposure in deep space.

It is hoped that the mission will help restore the credibility of the Russian planetary exploration program, which has suffered a string of well-publicized failures since the 1960s. Roald Sagdeev, the former director of the Space Research Institute in Moscow, said that “The major outcome is that Russia might establish its credibility again. It would open the door for major international missions.”

The animation below shows the intended Phobos-Grunt mission profile.