On October 11th at 11.10 am Moscow time a manned Soyuz-FG was launched from pad No. 5 of site No. 1 of Baikonur Cosmodrome. Onboard were members of the ISS-57/58 mission: Russian cosmonaut Alexei Ovchinin and American astronaut Nick Haig. Shortly after the launch, a command was given to emergency shutdown of the second-stage and detachment of the Soyuz descent vehicle for an emergency landing. The ballistic reentry emergency sequence worked perfectly, and parachute deployed. The crew landed 400 km from the launch site at 25 km from Dzhezkazgan. The crew was found in good health.

The cause of the launch abort has been preliminarily identified as the failure to jettison one of the four 1st stage boosters at 119 seconds. The booster then collided and damaged the second stage thus triggering the flight termination and the activation at 124 seconds of the lower escape system. Due to the relative low altitude at which the ballistic reentry started, Ovchinin and Hague experienced only a little spin to stabilize the capsule during descent and acceleration of just about 6g, which is less than every candidate for a space mission has to endure during training.

The launch vehicle Soyuz-FG is produced in Samara by the Russian Space Center (RCC) Progress, which is part of Roscosmos. So far, 64 launches of this modification of the Soyuz rocket were made, all were successful, the last one took place on June 6, 2018. The Soyuz MS spacecraft is produced by RSC Energia in the Moscow region near Korolev. The Soyuz MS-10 launch as well as its docking with the ISS were insured by Soglasie for the amount of 4.65 billion rubles.

How the 1st Stage Failed

The 1st stage of Soyuz consists of 4 lateral boosters, and by a core central stage that acts as part of 1st stage as well as 2nd stage. Each of the four 1st stage boosters, nicknamed “markovkas” (carrots) for their shape, are equipped with an RD-107 four chamber engine burning kerosene and liquid oxygen, fed by a turbopump.

Several auxiliary pumps are used to keep the propellant tanks pressurized with nitrogen. The main pump uses hydrogen peroxide. Each booster includes two thrusters which can swivel along a single axis for attitude control. The boosters burn lasts until 118 seconds after liftoff at an altitude of around 48 km. 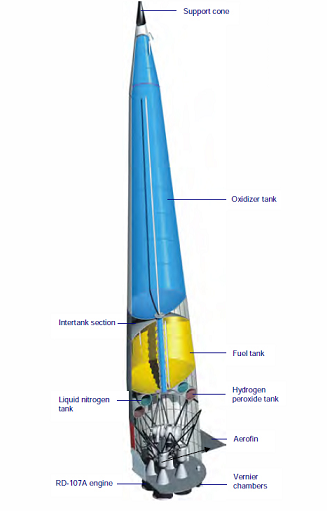 The Soyuz launcher includes since the original design made by Sergei Korolev an ingenious shock-free separation of the 1st stage boosters. The boosters are supposed to jettison simultaneously at the end of their use and fall back to Earth. The sequence is in three steps. 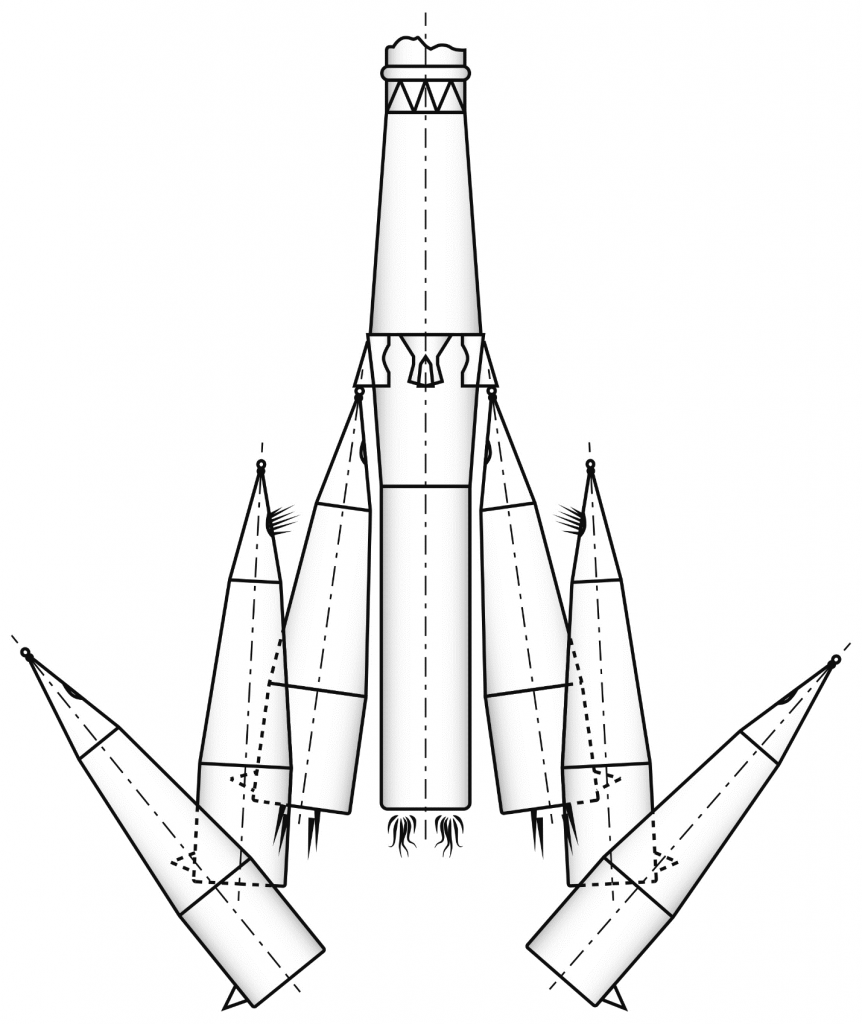 First, the control system sends simultaneous commands to shut off the engines and pyrotechnically cut the connections to the core stage at the base of the boosters. The residual thrust causes a small rotation and disengagement of the ball joint at the booster’s tip. At that moment a valve on the liquid oxygen tank in the upper section of the booster opens causing venting of pressurizing gas, which push the booster away from the central core stage. It appears from first reports that on Soyuz MS-10 the valve of one of the booster remained close and the booster collided and damaged the central core, thus triggering flight termination and crew capsule abort.

How the Escape System Worked

The Russian launch escape system, SAS (САС in Russian) includes two systems, an upper system and a lower one, respectively a solid motor with multiple nozzles on the tower (DU SAS), and four RDG (РДГ) motors attached to the fairing. Depending on when during flight the abort is initiated, the SAS operates differently. On launch pad and up to shortly before 1st stage boosters jettison, the SAS operates the tower solid motor first, at 14 Gs of acceleration, then switches to the RDG boosters for a few more seconds of thrust at around 7Gs. The tower motor is needed to gain minimum altitude for safe deployment of parachute and safe distance from the rocket when close to ground or flying through the thick layers of the atmosphere. Just before 1st stage boosters separation, the escape tower is jettisoned. Afterwards and until fairings separation the RDG motors are used to carry the crew away from the rocket. 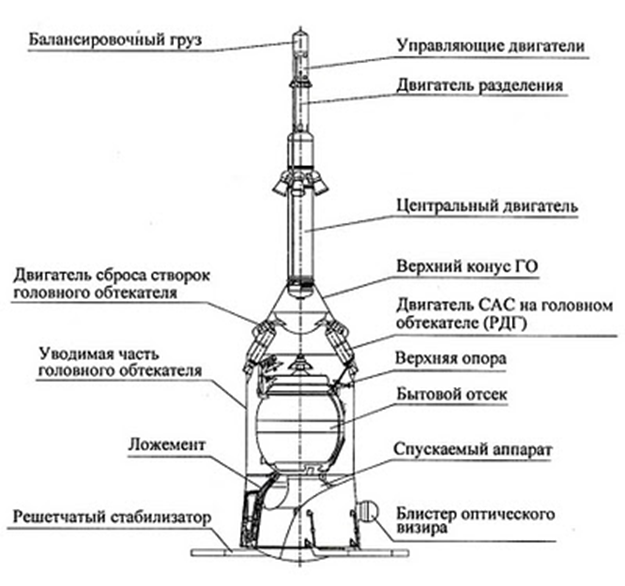 The original design of the Soyuz escape system included only the escape tower motor. As a consequence, there was a portion of flight from escape tower jettison to fairing separation where no escape capability was available. Then starting with Soyuz-T a new design was introduced that included two pairs of solid motors on the fairing. Such upgrade allowed to jettison the escape tower earlier instead of previous 160 seconds, thus compensating for the added mass of the motors on the fairing. Last week, such smart design change has saved two lives

To summarize, the sequence of events during the Soyuz MS-10:

119s – Oxygen tank valve of one of the 1st stage boosters fail-close. Booster collides and damages the central core. 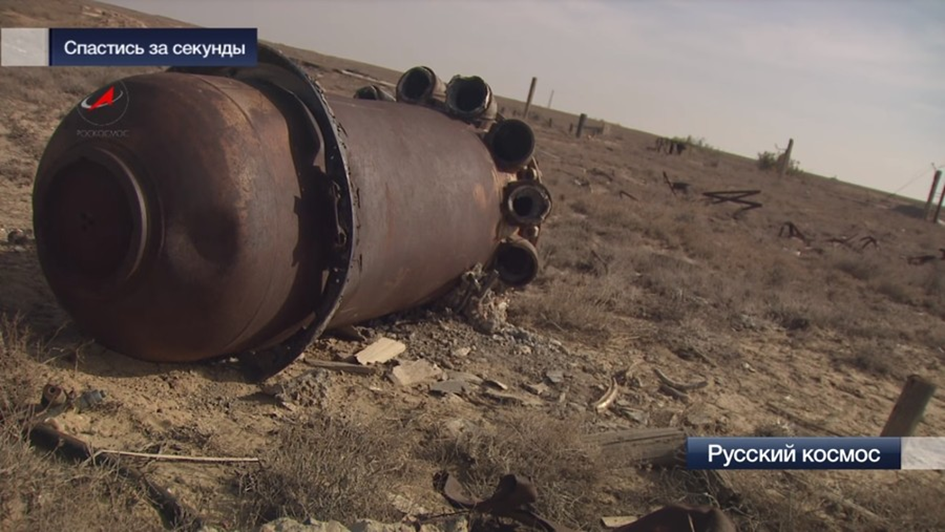