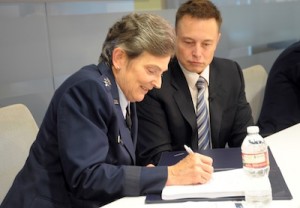 The U.S. Air Force Space and Missile Systems Center (SMC) and SpaceX have signed an agreement that will eventually allow SpaceX to be considered as a launch provider for U.S. military satellites, on June 7. The Cooperative Research and Development Agreement (CRADA) is an important milestone for SpaceX on the road to Falcon 9 v1.1 certification for National Security Space (NSS) missions.

“A CRADA enables the Air Force to evaluate the Falcon 9 v1.1 launch system according to the Air Force’s New Entrant Certification Guide,” reported a statement from SMC. “As part of the evaluation, SMC and SpaceX will look at the Falcon 9 v1.1’s flight history, vehicle design, reliability, process maturity, safety systems, manufacturing and operations, systems engineering, risk management and launch facilities.”

SMC is going to monitor at least three launches to meet the flight history requirements outlined by the Air Force. The process will evaluate SpaceX’s capability of carrying out NSS mission using the Falcon 9 v1.1.The move has put SpaceX in direct competition with United Launch Alliance (ULA), the company formed in 2006 by the merging of Boeing and Lockheed Martin’s rocket divisions. Since 2006, ULA has provided its Atlas 5 and Delta 4 rockets for all the major military launches, from communications and navigation to missile warning and reconnaissance satellites. The Air Force has identified 14 missions where SpaceX and other potential companies can competitively bid with ULA. According to Air Force officials, the entrance of new players in the market will reduce costs, ensuring flexibility to the military’s satellite launch manifest.

The Falcon 9 v1.1 rocket is the enhanced version of the Falcon 9 launcher with upgraded Merlin engines and a payload fairing to accommodate satellites. The Falcon 9 v1.1 will be able to deliver a standard telecommunications satellite into geostationary transfer orbit. Until now, SpaceX has launched five Falcon 9 V1.0’s, with three test flights and two operational missions to the International Space Station under NASA’s Commercial Orbital Transportation Services program. The first mission of Falcon 9 v1.1 is expected within the next few months.

Regardless of the certification plan, SpaceX has already won contracts for the launch of two Air Force satellites in late 2014. The contracts are under the Orbital/Suborbital Program 3 that allows commercial firms to compete to launch smaller military satellites.