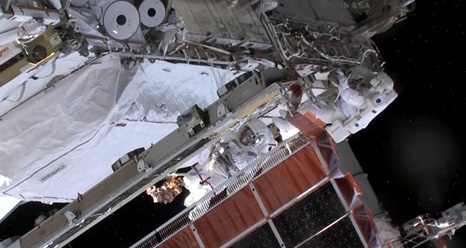 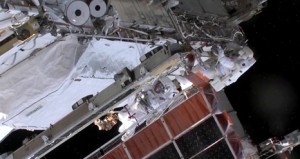 Expedition 35 Flight Engineers Chris Cassidy and Tom Marshburn ventured outside the International Space Station (ISS) to inspect and replace a pump controller box, which was the suspected source of an ammonia coolant leak, on May 11. The two astronauts investigated the cooling loop of power channel 2B on the ISS’s far port truss (P-6). The system appeared to be clean and the installation of a new Pump Flow Control Subassembly (PFCS) appears to have resolved the issue. The P-6 truss was launched to ISS on board the space shuttle in November 2000 and then relocated from its original installation position to the far port side of the station November 2007.

The extravehicular activity (EVA) took 5.5 hours and it was scheduled in less than two days after the leak was first observed, prompting engineers and flight controllers to begin plans to support the spacewalk. “From purely a station perspective, during an increment, I would say this is precedent-setting,” said NASA’s chief flight director, Norm Knight, before the EVA. 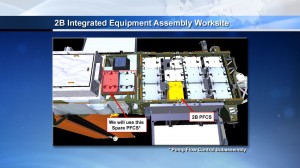 The work site on the P6 truss with the position of the old and new hardware used for the replacement (Credits: NASA).

Once Cassidy and Marshburn had left the Quest Airlock and traversed the distance to the P-6 truss, they began the process of checking the suspect area for the presence of ammonia flakes, and also began preparation of the worksite for the removal of the PFCS. The PFCS is the device that drives the cooling functions for the port truss. Since the astronauts could not identify the leak source, they proceeded with the substitution of the PFCS that had been reported “clean”. The unit used for the replacement was removed from its storage location on the P-6 Truss Long Spacer.  The system was then charged with 9 kg of ammonia, in order to aid the investigation. Mission Control ran the new pump while the spacewalkers watched for any ammonia snowflakes, but there have been no new signs of a leak. Although the new unit appears to have resolved the problem, it will take several weeks to confirm the problem has been solved. The old unit, which is most likely the leak source, was moved to the previous location of the new unit, on the P-6 truss long spacer. At 2:14 EDT, the 168th EVA in support of the assembly and maintenance of the ISS was successfully completed, setting a record for EVAs, which are usually planned and prepared months in advance.

Marshburn, along with Commander Hadfield and Flight engineer Romanenko will leave the ISS on May 13, officially ending Expedition 35 after 146 days.

Below, ISS Manager, Mike Suffredini, talks about the ammonia leak before the EVA (Courtesy of NASA).