In a hangar on the southern site of Airbus DS Mureaux plant, close to Paris, away from prying eyes, a team is working in complete secrecy since 2010 on ADELINE (Advanced Expendable Engine Launcher with Innovative Economy). Several prototype models have completed flight tests since 2010, and are now stored on the hangar floor.

The basic idea of ​​ADELINE is simple: retrieve the most expensive part of a launch vehicle, namely the engine, propulsion and avionics equipment bay, which represents 70-80% of the total value of a rocket. A rocket equipped with ADELINE would make a traditional lift off, then drop the first stage once exhausted. The first stage comprises a tank that is jettisoned while releasing a winged “return module” on a ballistic trajectory. This module is equipped with heat shield that allows to withstand the extreme heat of re-entry. Once back in the atmosphere, the module operates as a kind of small UAV. It starts two propellers on the wings and flies like an airplane finally landing on a normal runway. It is estimated that this solution would allows savings of around 30% on launch costs. The recovered rocket motor could be reused 10-20 times, or even more. 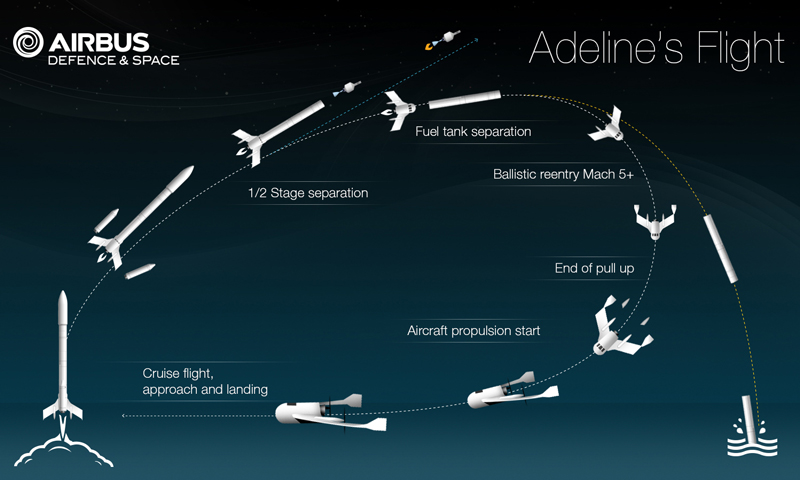 Adeline will enable the main engines and avionics of the launcher to be recovered and refurbished. credits: Airbus Defence & Space

The other advantage is that there is no need to develop a dedicated launcher: the system is designed as a kit, adaptable to any liquid propulsion rocket. The system is also relatively light. It consumes only 2 tons of fuel when Falcon 9 of SpaceX requires 40 tons of propellant to bring back to ground the first stage.