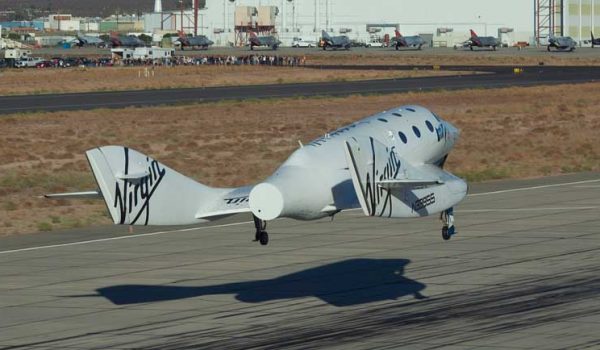 This arrangement dramatically increases the access researchers currently have to space. Each mission allows for up to 1300 lbs of scientific experiments, which could enable up to 600 experimental payloads per flight. Virgin Galactic will provide a Flight Test Engineer on every flight to monitor and interact with experiments as necessary, a capability that has never before been available on suborbital vehicles. If requested, these experiments can be quickly accessed after landing, a feature critical to many types of experiments. These research flights mark an important milestone for Virgin Galactic. Although generally referred to as a space tourism company—Virgin Galactic has already collected more than $58 million in deposits from 455 future tourist astronauts—providing access to space to researchers and their experiments is viewed by Virgin Galactic as both a future mission segment and a significant business opportunity.

“We are excited to be working with NASA to provide the research community with this opportunity to carry out experiments in space,” said George Whitesides, President and CEO of Virgin Galactic. “An enormous range of disciplines can benefit from access to space, but historically, such research opportunities have been rare and expensive. At Virgin Galactic, we are fully dedicated to revolutionizing access to space, both for tourist astronauts and, through programs like this, for researchers.”

NASA’s charter for these flights comes through the agency’s Flight Opportunities Program, managed by NASA’s Dryden Flight Research Center in Edwards, CA. Through this program, NASA has already arranged the flight of a broad range of innovative scientific payloads designed by NASA labs, universities, and private companies across the United States. To date, none of the experiments flown via the Flight Opportunities program have crossed the boundary into space.

With the flights secured, NASA will be able to select from a variety of proposals currently being solicited from the research community, which has already expressed strong interest. The Flight Opportunities Program will be responsible for selecting the payloads to be flown.

Virgin Galactic’s SpaceShipTwo is the only crewed suborbital vehicle in flight test today, and the only such vehicle based on a commercial spacecraft that has already sent humans into space, the X Prize-winning SpaceShipOne. Virgin Galactic offers a significantly larger cabin than any other company taking deposits today, allowing for unique technology demonstrations and research.