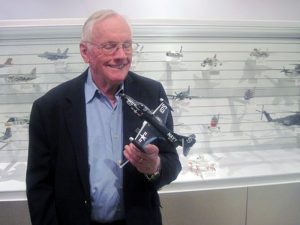 Armstrong visiting the Washington Navy Yard in December 2011, pictured here with a model of the F9F-2 Panther he flew in the Korean War as a Naval aviator (Credits: Naval Historical Foundation).

The reclusive first man on the Moon is recovering well after undergoing heart bypass surgery, according to reports relayed from Neil Armstrong’s wife Carol.

Word that Armstrong, who celebrated his 82nd birthday on August 5th, was under the knife came from fellow veteran astronaut Gene Cernan after he received the news from Carol Armstrong. Cernan relayed the information to NBC News.

After that, the well-wishes began pouring in. “NASA wishes Neil Armstrong the very best for a quick recovery from surgery,” said NASA Administrator Charles Bolden in a statement. Retired astronaut Buzz Aldrin chimed in via Twitter: “Just heard about Neil & heart surgery today. Sending my best wishes for a speedy recovery.” Aldrin went on to explain that he and Armstrong had agreed to celebrate their 50th anniversary of the Apollo 11 Moon landing together in 2019, so Armstrong was obliged to make it through the procedure.

As the first man to land on the Moon and utter the now world famous adage “That’s one small step for man, one giant leap for mankind,” Armstrong is among the most revered of space pioneers. He along with fellow astronauts Aldrin, Michael Collins, and John Glenn were awarded the New Frontier Congressional Gold Medal in November 2011, the latest in a long series of awards and honors.

Although much in demand in the years since he set foot on the Moon, Armstrong has been among the most reclusive of former astronauts. His self-effacement made it all the more suprising when he granted a rare interview to Alex Malley, CEO of CPA Australia, in May 2012. According to many reports, Malley’s coup owed a great deal to his profession as an accountant, just like Armstrong’s auditor father. Whatever led to it, the interview provided an opportunity for the public to hear Armstrong recount his flight history and his views on NASA then and now. Armstrong has been a critic of the shifting priorities of NASA’s human spaceflight program, an opinion he has expressed repeatedly at Congressional hearings.

Armstrong expounds this view in the interview clip below. For the full interview, go to http://thebottomline.cpaaustralia.com.au/