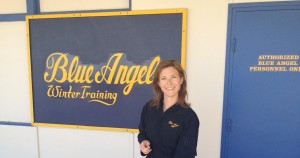 Abegael “Abby” Jakey has aviation in her blood, taking her first flight at six months old in a Globe Swift. She hasn’t veered too far away from the industry since.

A pilot since she was 17, daughter and sister to commercial airline mechanics, recreational pilots, former Navy enlisted men, and a wife to a commercial airline pilot, 32 year-old Jakey worked through college as a certified flight instructor teaching others to fly safely.

She has had the unique opportunity to grow up flying antique airplanes, which drove her to her first flying job outside instructing, flying freight in a Beech 18 that led to a job as a regional airline pilot.

Now a contractor with Booz Allen Hamilton, Inc. working for NASA’s Aviation Safety Reporting System (ASRS), Jakey recently took her passion for flight to a higher level as she rode with the U.S. Navy Flight Demonstration Squadron, the Blue Angels.

In her position with the ASRS, Jakey coordinates outreach about the program to pilots, air traffic controllers, maintenance technicians, flight attendants, dispatchers and other aviation personnel. The program collects, analyzes and responds to confidential and voluntarily submitted safety incident or situation reports from those who are frontline personnel working in the National Airspace System. The reports are combined into a set of data that researchers and others can examine as a whole or individually, to reveal potential patterns of unsafe practices or conditions that might otherwise go unreported. Under a memorandum of agreement with the Federal Aviation Administration (FAA), NASA manages the ASRS at NASA’s Ames Research Center in Silicon Valley, Calif.

Because of her dedication to flight and the benefit of adding this experience to her understanding of the full scope of aviation, Jakey was invited earlier this year to ride along with the Blue Angels. The mission of the Blue Angels is to enhance Navy recruiting, and to represent Navy and Marine Corps aviation to the U.S. and its armed forces to America and other countries as international ambassadors of good will. Jakey was selected to fly based on her ability to influence attitudes and opinions in her community.

On March 13, 2013, Jakey went to El Centro, Calif., to fly in an F/A-18 Hornet with Navy pilot Lt. Ryan Chamberlain. The following is Jakey’s account of her experience, in her own words.

I woke up on the morning of March 13, 2013 fully expecting some unforeseen dark force to ruin the chance of a lifetime that was just around the corner. What was scheduled to happen in less than nine hours was almost too good to be true. Without my morning coffee and five minutes ahead of our scheduled 5:30 a.m. departure, I got into our rental car with my husband Kevin, our four year-old daughter Madison and Don Purdy, a colleague and former Naval aviator. We were bound for the Naval Air Facility El Centro, California from San Diego. Being susceptible to car sickness, I drove. I was nervous. I was anxious, yet eager, and I was enthusiastically looking forward to my upcoming flight with the U.S. Navy Blue Angels.

At 1:15 p.m., MC1 (Mass Communications Specialist) Terry Siren asked me to suit up. I nervously put on the provided flight suit and walked out to the van that would transport us to the glistening F/A-18 Hornet, Blue Angel #7. It was 92 degrees on the ramp when the crew chief, AME2 (Aviation Structural Mechanic) Jared Mann wasted no time buckling me in. Shortly thereafter, Lt. Ryan Chamberlain approached, strapped in, and without much delay we were ready to go. Fired up, I waved my daughter and husband an “Aloha” and away we went.

On taxi-out, Lt. Chamberlain and I started some casual conversation. I explained my flight experience and he gave a brief account of his. We both were turbo-prop pilots in a former life and the welcome rapport of the conversation instantly put me at ease for the high-G maneuvers I was about to experience. Lt. Chamberlain asked me to make the call to the tower for takeoff. I was a bit surprised at the suggestion, but didn’t hesitate; a plane is a plane… right? But, when you say high performance takeoff for an F-18, it’s a little different than what I’m accustomed to. As we took the runway, I grabbed a deep breath and wore a million dollar grin as we started our takeoff roll. At 280 knots we pulled up to 90 degrees and at that point I knew what 6 G’s felt like; an amazing experience. For the next 50 minutes I felt like a kid in a candy store, a flyer at the pinnacle of aviation. Here I was, actually experiencing it; the flight and opportunity of a lifetime. Diamond rolls, squirrel cages, Cuban eights, sustained inverted flight (not once, but twice), from slow flight to just over 600 knots in 30 seconds, practice target runs — 50 minutes of exhilarating, envelope-pushing fun. Returning for the overhead break back at the field, Lt. Chamberlain briefed me on the overhead break. This time, at 7.8 G’s, he “got me.” I briefly passed out. We shared a smart comment and laugh on arrival to a textbook landing.

The whole time in El Centro, I was in awe of the professional demeanor and manner of the Blue Angels. The entire team was made up of exceptional professionals representing the highest traditions of the men and women of our US Navy and Marine Corps. It was an absolute honor to be invited and welcomed into their operation for a day.

The next day, I woke up and was still glowing like I had just won the lottery… to an aviator it might as well have been a billion bucks. I was honored, and always will be, for having this experience.