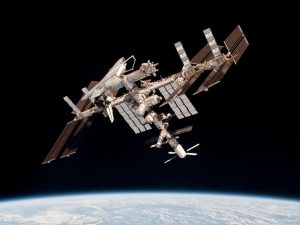 This image of the International Space Station with the docked Europe’s ATV Johannes Kepler and Space Shuttle Endeavour was taken by Expedition 27 crew member Paolo Nespoli from the Soyuz TMA-20 following its undocking on 24 May 2011 (Credits: ESA).

Despite its mass of more than 410 metric tons, the International Space Station (ISS) must occasionally play dodge ball with the numerous man-made objects falling through its orbit (as shown in the figure below). For the first dozen years of its existence, the ISS averaged only one collision avoidance maneuver per year. However, in the past 12 months (April 2011 to April 2012), the ISS was forced to execute four collision avoidance maneuvers and would have conducted two additional maneuvers if the warnings had come sooner.

What is the reason for this increase in collision avoidance maneuvers? The process and the fidelity of conjunction assessments (i.e., the calculations made to determine when a known object is expected to come within a few kilometers of the ISS) have remained unchanged for several years. The threat level at which a collision maneuver is required (collision risk greater than 1 in 10,000) also has remained the same. No new source of debris in the immediate vicinity of the ISS has appeared, as happened in 2008 when a Russian spacecraft (Cosmos 2421) broke-up into more than 500 pieces of tracked debris just 60 km above the ISS.

A simple statistical variation in the frequency of the close approaches does not appear to be the complete answer either. A likely contributing factor is the Sun (ODQN, January 2012, p. 4). Solar activity varies in a nearly sinusoidal pattern with a period of approximately 11 years. After an extended interval of very low solar activity from 2006 through 2010, the Sun is rapidly approaching an expected peak of activity in 2013. As solar activity increases, the Earth’s atmosphere is heated and expands, resulting in increased drag on objects in low Earth orbit. This, in turn, leads to a higher number of objects falling through the ISS orbit (near 400 km) on their way to a fiery reentry.

For example, during 2011 approximately 500 cataloged debris descended through the ISS altitude. In comparison, the totals for 2009 and 2010 were less than 300 and less than 400, respectively. Half of the cataloged debris that reentered during 2011 came from the Chinese anti-satellite test of 2007 involving the Fengyun-1C satellite or the accidental collision of the Cosmos 2251 and Iridium 33 spacecraft in 2009, both of which occurred at altitudes several hundred kilometers above the ISS. Small fragmentation debris are especially affected by increases in solar activity. The table below indicates that four of the six close approaches involved debris  from these two events.

Since solar activity is expected to increase further during 2012, the rate of orbital decay of debris in the low Earth orbit region should likewise increase, setting the stage for additional ISS collision avoidance maneuvers.