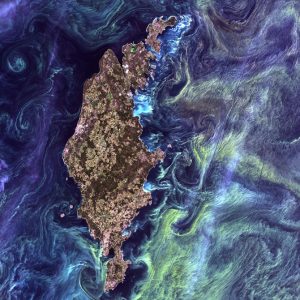 Swirls of phytoplankton make a Van Gogh-like scene in thie 2005 Landsat image of Gotland, a Swedish island in the Baltic Sea (Credits: NASA).

Source: NASA NASA and the Interior Department Monday marked the 40th anniversary of the Landsat program, the world’s longest-running Earth-observing satellite program. The first Landsat satellite was launched July 23, 1972, from Vandenberg Air Force Base in California. The 40-year Landsat record provides global coverage that shows large-scale human activities such as building cities and farming. The program is a sustained effort by the United States to provide direct societal benefits across a wide range of human endeavors, including human and environmental health, energy and water management, urban planning, disaster recovery and agriculture. Landsat images from space are not merely pictures. They contain many layers of data collected at different points along the visible and invisible light spectrum. A single Landsat scene taken from 400 miles above Earth can accurately detail the condition of hundreds of thousands of acres of grassland, agricultural crops or forests. “Landsat has given us a critical perspective on our planet over the long term and will continue to help us understand the big picture of Earth and its changes from space,” said NASA Administrator Charles Bolden. “With this view we are better prepared to take action on the ground and be better stewards of our home.” 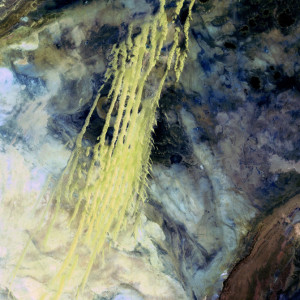 In cooperation with the U.S. Geological Survey (USGS), a science agency of the Interior Department, NASA launched six of the seven Landsat satellites. The resulting archive of Earth observations forms a comprehensive record of human and natural land changes. “Over four decades, data from the Landsat series of satellites have become a vital reference worldwide for advancing our understanding of the science of the land,” said Interior Department Secretary Ken Salazar. “The 40-year Landsat archive forms an indelible and objective register of America’s natural heritage and thus it has become part of this department’s legacy to the American people.” Remote-sensing satellites such as the Landsat series help scientists to observe the world beyond the power of human sight, to monitor changes and to detect critical trends in the conditions of natural resources. “With its entirely objective, long term records for the entire surface of the globe, the Landsat archive serves as the world’s free press, allowing any person, anywhere, to access vital information without charge,” said Interior’s Anne Castle, assistant secretary for water and science. “Landsat has been a game changer for agricultural monitoring, climate change research and water management.” NASA is preparing to launch the next Landsat satellite, the Landsat Data Continuity Mission (LDCM), in February 2013 from Vandeberg. LDCM will be the most technologically advanced satellite in the Landsat series. LDCM sensors take advantage of evolutionary advances in detector and sensor technologies to improve performance and increase reliability. LDCM will join Landsat 5 and Landsat 7 satellites in Earth orbit to continue the Landsat data record. “The first 40 years of the Landsat program have delivered the most consistent and reliable record of Earth’s changing landscape,” said Michael Freilich, director of NASA’s Earth Science Division in the Science Mission Directorate in Washington. “We look forward to continuing this tradition of excellence with the even greater capacity and enhanced technologies of LDCM.” NASA and USGS will highlight the accomplishments of the Landsat program in a televised news briefing 11 a.m. EDT, Monday at the Newseum, 555 Pennsylvania Ave. NW, in Washington. During the briefing, the agencies will announce the 10 most significant images from the Landsat record; the U.S. regions selected for the “My American Landscape” contest showing local environmental changes; and the top five Landsat “Earth As Art” images selected in an online poll. The public is encouraged to participate in the briefing’s question-and-answer sessions by using the Twitter hashtag #asknasa. NASA Television and the NASA website will provide live briefing coverage. For NASA TV streaming video, scheduling and downlink information, visit: http://www.nasa.gov/ntv For more information about the Landsat program, visit: http://landsat.usgs.gov and http://www.nasa.gov/landsat Can’t get enough Landsat images? Try the video below: