KENNEDY SPACE CENTER, Fla — The operators of the Kennedy Space Center Visitor Complex, Delaware North Companies Parks and Resorts (DNC), pulled out all the stops for the grand opening of its new Space Shuttle Atlantis Exhibit. And it is new; the structure even has that “new car” smell. With a parade of astronauts, a “pre-show” that left many speechless, small touches that only a space enthusiast could pick up, and an orbiter poised to begin a new journey—it is clear that the $100 million invested into this structure was well worth the investment.

Things kicked off at 9:30 a.m. EDT with a procession of astronauts to the stage at what is now known as “Atlantis Plaza.” Each space flyer was introduced by CNN’s John Zarrella. They included an astronaut from each of Atlantis’ 33 missions (and in some cases more than one from each of the orbiter’s flights). 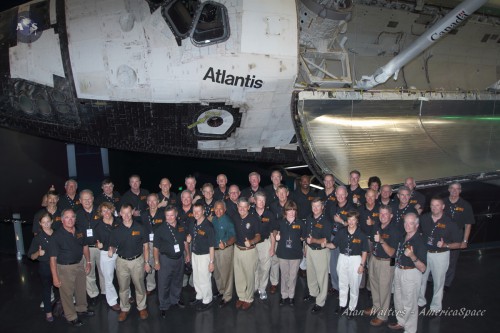 The Kennedy Space Center Visitor Complex opened its $100 million Atlantis Exhibit to the public Saturday, June 29. It was attended by astronauts who flew on each of the orbiter’s 33 missions, NASA and other officials, and thousands of guests (Credits: Alan Walters / awaltersphoto.com).

Both NASA and the Visitor Complex, however, invited more than just astronauts for this special event. 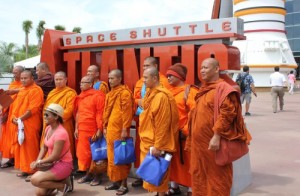 The Visitor Complex hosts guests from points across the globe. Saturday’s event was no exception, with a variety of nationalities and religions attending the historic grand opening (Credits: Jason Rhian / AmericaSpace).

“I don’t know the total number of invitations we sent out, but NASA had a list and we had a list. We wanted as many of the space workers as the building could hold to attend. We’ve crammed them in here; I doubt we got them all, but hopefully, through the rehearsals and all, we got as many as we could,” Moore said.

One of the more well-known space workers in attendance expressed his recollections of the shuttle era as well as what today was like for him.

“I worked on shuttle for a little over 33 years, and to be a part of the team that prepared them for flight … it’s just amazing to be a part of that history,” said Terry White, one of the legions of workers who cared for the shuttle. “I started out as a technician working the original build of Columbia, and then I became a supervisor while we were still processing STS-1. I consider myself fortunate to have worked on all the shuttle missions from the first to the last. I ended up as a project lead for orbiter processing when the program closed. It’s been an emotional experience, but seeing the reactions on the public’s faces as they came in made it worth it.”

The opening was kicked off by a mock “launch”—with a pyrotechnic display. The media was then escorted inside to have the opportunity to photograph the various astronauts giving their impressions of the new exhibit. DNC plans for the Atlantis Exhibit to be the centerpiece of the complex’s 10-year plan.

The first Visitor Complex guests were allowed into the exhibit at around 10:15 a.m. EDT. While there were plenty of sights and sounds (some 60 interactive displays, multimedia presentations, and virtual-reality booths were waiting for them), there were other special attractions that were made available. 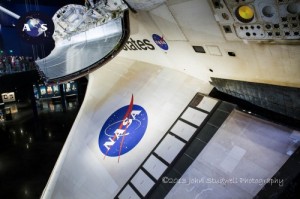 Atlantis is at an inclination of 43.21 degrees (think of the iconic launch countdown). The structure was built around the Shuttle Launch Experience, which guests can enter from inside the Atlantis Exhibit, adding more entertainment opportunities for attendees (Credits: John Studwell / AmericaSpace).

Throughout a large portion of the day, astronauts were available to pose with guests in front of one of the astrovans, which ferried crews out to the pad. Also on hand were several astronauts signing autographs; these included Mike Mullane, Brewster Shaw, Ken Ham, and the commander of the last shuttle missions, STS-135 (which Atlantis conducted), Chris Ferguson.
For several of the astronauts in attendance, the event was a bittersweet one.

“To get to something better, you have to have change,” Cabana said. “Change isn’t easy, but seeing Atlantis’ amazing exhibit … it makes it a lot easier.”

As stated earlier, Atlantis flew the final mission of the shuttle era, STS-135. It concluded the 30-year program with a safe touchdown at the Kennedy Space Center’s Shuttle Landing Facility in July 2011. The orbiter was transferred over to the Visitor Complex in November of last year. Once at the Visitor Complex, the real work began. 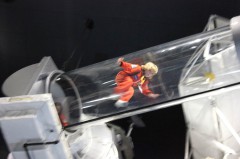 The exhibit has several elements that are geared for children. One (seen here) is a tube that children can take across two points in the exhibit. Placed high in the air, the tube provides children with a unique vantage point of the facility. There are a number of other activities dedicated to kids within Atlantis’ new home (Credits: Jason Rhian / AmericaSpace).

Through a highly orchestrated series of maneuvers, the orbiter was raised 30 feet up into an inclination of 43.21 degrees. Cocooned in the same type of plastic used when boats are moved across land, Atlantis’ Exhibit was built around the orbiter. The wrap was removed just a couple months before the grand opening, the orbiter’s payload bay doors were opened (and supported as the doors cannot support their own weight in Earth’s gravity), and a mockup of Atlantis’ robotic Canadarm was put into place, arcing out over one of the many walkways around the shuttle.

There are several other models of elements of the shuttle’s 30-year history throughout the exhibit. The most prominent is the exterior, full-scale model of the external tank and twin rocket boosters that helped propel the shuttles into the black on 135 separate occasions. A full-scale model of the Hubble Space Telescope, as well as spacewalkers, decorate the interior (one of the astronaut mockups even rides at the tip of a Canadarm). There are a number of other attractions within: actual shuttle tires that safely touched down on Atlantis on STS-135 and models of the mate/de-mate device, but perhaps of greater interest to the swarms of children in attendance was the space potty (more than a few stuck their heads inside for a look around). 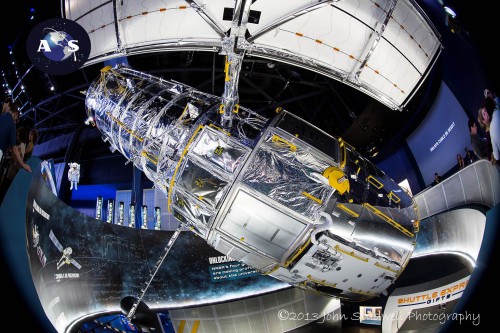 Besides some 60 interactive displays, the new Atlantis Exhibit boasts life-sized models of the Hubble Space Telescope and numerous other artifacts of the space shuttle era (Credits: John Studwell / AmericaSpace).

The Atlantis Exhibit stands out from the two other space-flown orbiters which are currently on display. Space Shuttle Discovery was moved into the Smithsonian’s Steven F. Udvar-Hazy Center, located in Chantilly, Va. It was moved into the spot once held by the flight test article shuttle, Enterprise. Endeavour is currently housed in a temporary structure as it waits for the funds needed to produce the permanent structure in which it will be housed. Enterprise was delivered to the Intrepid Sea, Air, and Space Museum in New York.

Many of the astronauts in attendance expressed strong reactions as to what they felt the exhibit would be able to achieve. Some also mentioned their hopes for the future. 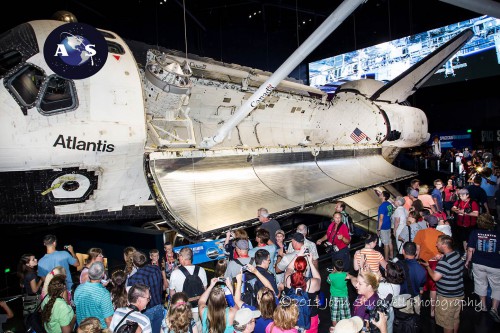 Guests fill the Kennedy Space Center Visitor Complex’s Atlantis Exhibit, many of whom have never seen a space shuttle before and certainly not this close (Credits: John Studwell AmericaSpace).

– By Jason Rhian. The author would like to thank several people, without whom this article would not have been possible: Andrea Farmer, Jim Hillhouse, Emily Carney, John Studwell, Alan Walters, and all the great folks at the Kennedy Space Center Visitor Complex. Stay tuned to AmericaSpace for more features about the grand opening of the Space Shuttle Atlantis exhibit.