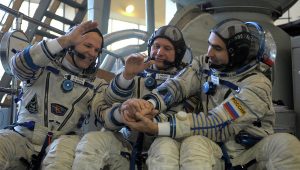 A Russian state commission on Tuesday approved the main and backup crews of a new expedition to the International Space Station (ISS) ahead of the launch on October 23.

It will be the first space mission for Novitsky and Tarelkin. Ford spent 14 days in space when he traveled to the ISS as the Shuttle Discovery pilot in 2009.

The crew has chosen “Kazbek” as their call-sign after one of the highest peaks in the Caucasus Mountains, and a tiny behemoth toy as their talisman and Zero-gravity indicator.

The launch of the Soyuz TMA-06M manned spacecraft was earlier moved from October 15 to October 23 due to a technical problem detected during a preflight checkup.

Expedition 33 is expected to spend 148 days on board the orbital station. The crew will carry out a series of scientific experiments, and receive four Russian Progress space freighters and a European ATV-4 cargo spacecraft.

No spacewalks have been scheduled for this mission.

The crew is also planning to keep a “space blog,” recording their daily life on board the ISS.

“Our work will certainly be a priority, but I hope we will have time to keep the space blog,” Yevgeny Tarelkin told reporters on Tuesday. “We really want to do it because we need to promote space exploration.”