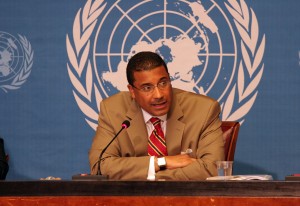 Thank you for your kind introduction. I am honored to have been invited back to the Symposium to give a keynote speech this year. When I spoke last year, the focus was on the President’s new National Space Policy, which has a greater emphasis than ever before on the role diplomacy can and should play in space, and on the need for U.S. leadership.

Last month, Secretary Clinton gave a speech on American global leadership where she said, “In such a complex world, it is no longer enough to be strong. You also have to be smart and persuasive. The test of our leadership going forward will be our ability to mobilize disparate people and nations to work together to solve common problems, and advance shared values and aspirations.”

While these remarks were on U.S. foreign policy in general, they apply remarkably well to U.S. space policy. The world is increasingly interconnected through, and increasingly dependent on, space systems. Our prosperity and security rely on communication, navigation, financial activities, and scores of other activities that depend on information derived from space systems. The space environment, with its challenges of natural and man-made threats, is as complex as the world Secretary Clinton described. This complexity means that all nations must work together to adopt approaches for responsible behavior in space, and the United States, with our history of leadership in space, must lead the pursuit of potential solutions to these shared challenges.

Certainly no one in this audience needs to be reminded of the congested and contested nature of space, nor of the President’s goals for expanding international cooperation, strengthening stability in space, and increasing assurance and resilience of mission-essential functions. However, some of you may not be familiar with the active leadership role and responsibilities the State Department and diplomacy have in addressing the President’s goals.

One issue that underlines the need for international cooperation and diplomacy is the growing presence of debris in space. There are now approximately 21,000 pieces of trackable debris 10 centimeters or larger in various Earth orbits – about 6,000 metric tons of debris orbiting the Earth. While some pieces of debris are simply “dead” satellites or spent booster upper stages still orbiting, and others are the results of accidents or mishaps, such as the 2009 Cosmos-Iridium collision, some debris is the result of intentionally destructive events, such as China’s test in space of an anti-satellite weapon in 2007. Experts warn that the quantity and density of man-made debris significantly increase the odds of future damaging collisions. To address the growing problem of orbital debris, the United States, through the State Department, has expanded its engagement within the United Nations and with other governments and non-governmental organizations. We are continuing to lead the development and adoption of international standards to minimize debris, building upon the foundation of the U.N. Space Debris Mitigation Guidelines. We are also working to develop international and industry standards to slow down the accumulation of debris in space, and to develop and implement international “best practices” of responsible behavior in space that will put us all on a more sustainable path.

International cooperation is also necessary to ensure that we have robust situational awareness of the space environment. No one knows better than U.S. Strategic Command that even with the best technology and expertise available, no one nation has the resources to precisely track every space object. The U.S. National Space Policy implicitly recognizes this fact and thus directs us to collaborate with foreign governments, the private sector, and other organizations to improve our space situational awareness. One example of our efforts to cooperate internationally in the area of space situational awareness is our collaboration with Europe as it develops its own space situational awareness, or SSA system. The Department of State, in close collaboration with the Department of Defense, is currently engaged in policy and technical exchanges with regional and international organizations such as the European Union and the European Space Agency, as well as the governments of individual European allies. These discussions are considering approaches to protect our shared security interests as well as measures to ensure interoperability between our current and planned SSA architectures. Looking ahead, we also see opportunities for cooperation on SSA with our allies and partners in the Asia-Pacific and other regions.

International cooperation is also essential to prevent future collisions through the sharing of information with other space-faring nations and our industry partners. As a result, we are seeking to improve our ability to share information with other space-faring nations as well as with our industry partners. The National Space Policy calls for international collaboration on the dissemination of orbital tracking information, including predictions of potentially hazardous conjunctions between orbiting objects. Such collaboration has the benefit of not only preserving the sustainability of space through the prevention of collisions, but improving our own capabilities to conduct expanded space object detection, characterization, and tracking and maintaining the space object catalogue. In coordination with U.S. Strategic Command, the Department of State is working to facilitate the rapid notification of space hazards via Conjunction Summary Messages by reaching out to all space-faring nations to ensure that the Joint Space Operations Center has reliable contact information for transmitting timely notification messages to both government and private sector satellite operations centers.

The assurance and resilience of mission-essential functions also benefits from international collaboration. Led by the Department of State, Critical Infrastructure Protection workshops between the United States and the EU seek to identify trans-Atlantic interdependencies, vulnerabilities, and risk-mitigation strategies. The goal of these workshops is to increase the assurance and resilience of mission-essential functions that are enabled by commercial and civil spacecraft and supporting infrastructures against disruption, degradation, and destruction, whether from environmental, mechanical, electronic, or hostile causes. These workshops include the participation of U.S. Strategic Command, which is the lead within the Department of Defense for the protection of defense space critical infrastructures as well as the USG’s responses to purposeful interference against U.S. space interests.

The examples I just mentioned represent the new role the Department of State is taking in regards to national security space policy. However, we are also taking a more active leadership role within the functions traditionally within State’s purview.

One of the ways the State Department is helping the United States move forward with ensuring safety, sustainability, stability, and security in space is through our pursuit of near-term, voluntary, and pragmatic transparency and confidence-building measures (TCBMs). TCBMs are means by which countries can address challenges and share information with the aim of creating mutual understanding and reducing tensions between countries. Through TCBMs we can address important areas such as orbital debris, space situational awareness, and collision avoidance, as well as increase familiarity and trust and encourage openness among space actors.

The United States conducts a variety of bilateral and multilateral TCBMs to encourage responsible actions in space. The State Department developed and regularly conducts space security dialogues and discussions with traditional allies and partners such as Australia, France, Japan, Canada, and the United Kingdom. With the creation of the new National Space Policy, the State Department has also focused on reaching out to key emerging space-faring nations to begin similar dialogues.

For example, following the February 2009 collision between a commercial Iridium spacecraft and an inactive Russian military satellite, the United States and Russia were in direct communication to discuss the incident. This experience has contributed to an on-going bilateral dialogue with Russia on developing additional concrete and pragmatic bilateral TCBMs that will enhance spaceflight safety. Our recognition of the importance in working with our Russian counterparts to strengthen stability in space has led us to hold three space security dialogues in the past 16 months.

The global reliance on space systems means that the challenges of operating in space cannot be addressed by a few parties, but must be recognized and tackled by many. To that end, the State Department engages on space in a variety of multinational fora, from the U.N. General Assembly to the Conference on Disarmament. We believe that efforts to adopt space TCBMs should be built upon “bottom up” initiatives developed by government and private sector satellite operators as well as from “top down” government-to-government negotiations.

Therefore, the State Department is taking a leadership role in the working group of the UN Committee on the Peaceful Uses of Outer Space (COPUOS) on long-term sustainability. The long-term sustainability working group on space activities will be a key forum for the international development of “best practices guidelines” for space activities, including orbital debris mitigation, collision warning and avoidance, and space situational awareness. All of these activities can enhance spaceflight safety for space operators and are foundational to pursuing TCBMs that enhance stability and security.

The State Department is also anticipating next year’s Group of Government Experts (or GGE) on Outer Space TCBMs established by UN General Assembly Resolution 65/68. We support the full consideration of all helpful proposals for bilateral and multilateral TCBMs. Such proposals could include measures aimed at enhancing the transparency of national security space policies, strategies, activities and experiments or notifications regarding environmental or unintentional hazards to spaceflight safety. International consultations to prevent incidents in outer space and to prevent or minimize the risks of potentially harmful interference could also be a helpful TCBM to consider. We look forward to working with our international colleagues to engage in a GGE that serves as a constructive mechanism to examine voluntary and pragmatic TCBMs that enhance stability and security, and promote responsible operations in space.

The space environment is at serious risk from a number of sources, including space debris and a lack of transparency in the conduct of space activities. It is our belief that one of the most beneficial multilateral TCBMs for strengthening stability in space could be the adoption of “best practice” guidelines or an international “code of conduct.” A code of conduct could help establish guidelines for safe and responsible use of space, avoid collisions, reduce radiofrequency interference, and call out irresponsible behavior.

Unless the international community adopts positive measures to address irresponsible behavior in space, the environment around our planet will become increasingly hazardous to both human and robotic spaceflight. To that end, the United States is actively considering the European Union’s proposal for a non-legally binding, international “Code of Conduct for Outer Space Activities.” We have consulted with the EU over the past four years and see the EU’s initiative as a promising basis for an international Code of Conduct. Such a “Code,” if accepted by established and emerging space powers, could help promote best practices and ensure the long-term safety, sustainability, security, and stability of the space environment.

Efforts to strengthen stability and security in space must be complemented by continued U.S. leadership in the area of international cooperation to ensure the safety and long-term sustainability of space activities in a congested, contested, and complex space environment. Consequently, the State Department is committed to taking a more active leadership role in international space cooperation and diplomacy. As Secretary Clinton has said, “in the 21st century, the most important players in international affairs will be the ones who make things happen, who get results, not those who block progress. And the United States will stand with the problem-solvers because that’s who we are.”

Thank you very much.