Figure 1: The Briz-M upper stage contains a central engine and propellant surrounded by an auxiliary propellant tank, which is ejected part-way through the mission.

The explosion of a failed launch vehicle upper stage on 16 October created thousands of new debris which pose collision risks to hundreds of  satellites operating in low Earth orbit (LEO), including the International Space Station (ISS).  Fortunately, the threat will be relatively short-lived with the majority of the debris expected to reenter the atmosphere within one year.

The explosion of the Proton Briz-M stage (International Designator 2012-044C, U.S. Satellite Number 38746) occurred just a day after the publication of the October 2012 issue of  the Orbital Debris Quarterly News, which contained an article describing the potential for just such a breakup  (ODQN, October 2012, pp. 2-3).  The stage (Figure 1), with a dry mass of 2.6 metric tons, had been stranded in an elliptical orbit of about 265 km by 5015 km with an estimated 10 metric tons of propellant, following a launch malfunction on 6 August. 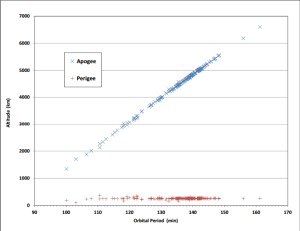 The massive fragmentation occurred at an altitude of 290 km as the stage approached perigee.  Although as many as 700 large debris were detected by the U.S. Space Surveillance Network (SSN), only 111 had been officially cataloged by the end of  December.  Figure 2 indicates the altitude distribution of  more than 200 debris as of  25 October.  The number of debris potentially hazardous to operational spacecraft was estimated to be much more numerous.

To ascertain the population of small debris from the Briz-M breakup, the Orbital Debris Program Office requested special observations of the debris cloud by the Haystack Auxiliary radar operated by the Massachusetts Institute of Technology’s Lincoln Laboratory and by the Jet Propulsion Laboratory’s Goldstone radars in California.  These radars can detect centimeter- and millimeter-class objects at the Briz-M debris perigee altitudes.  The observations did indicate a much larger debris population than could be tracked by the SSN. 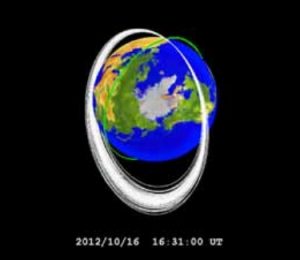 Figure 3: Orbital planes of the International Space Station (green) and the Briz-M debris (white) at the time of the breakup.

Since the ISS was in a nearly circular orbit at 415 km, all the Briz-M debris passed through the altitude of the station twice each revolution.  Figure 3 illustrates that the orbital planes of ISS and the Briz-M debris were nearly perpendicular at the time of the explosion, giving rise to high relative velocities (Figure 4).  However, the higher precession rate of the plane of the ISS gradually led to a closer alignment of the orbital planes in December, leading to lower relative velocities and a tendency of potential impacts to occur near the aft end of the ISS.  Technical assessments found the risk to the ISS from the Briz-M debris to be a small fraction of the risk from the normal background debris environment. 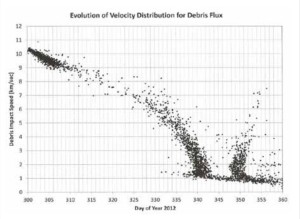 International Launch Source (ILS) officials have stated that the two remaining Briz-M stages were passivated after their anomalous flights and do not pose an explosion hazard.