A telescopic registration of one of the tumbling solar panel covers in orbit, jettisoned after the Dragon-CRS-8 launch on April 8, 2016, has been taken 1 day after launch. Both covers were identified as objects 2016-024B and 2016-024C and were passing with an interval of around 1 minute. Routinely 2 covers can be seen after a Dragon launch together with the spacecraft and the 2nd stage of the Falcon 9 rocket. However the 2nd stage wasn’t present anymore on April 9th. In previous Dragon missions it was visible for several days after lift off. In 2012, a detailed image was captured with even the Merlin engine visible.

Dragon is the first American commercial transport vehicle to use deployable solar arrays for power. The solar panels are folded and protected by fairing covers for launch. Post launch, the covers are jettisoned in orbit. It is one of these solar panel fairings or covers that has been photographed below.

Tumbling solar panel cover (object 2016-024B) videographed while it was tumbling on April 9, 2016 (credit: Ralf Vandebergh)

This is my first successful high resolution registration of launch debris in orbit other than the rocket stages and the spacecraft itself. Previously I captured several times the tumbling motion of spent rocket stages with success. The tracking is not an easy job due to the tumbling, causing the objects to brighten and dim (maximum/minimum). The alignment is realized fully manually by using the on-crosshairs method (tracking magnification was 6x, Telescope 10” Newtonian in secondary focus). Objects as tumbling panel covers are very difficult to photograph manually as I do. The extreme brightness variations will make you lose it on the crosshairs most of the time. You need to use your experience to move the tracking scope at the right angular speed without actually seeing the object to meet it again during a maximum when it lightens up again. 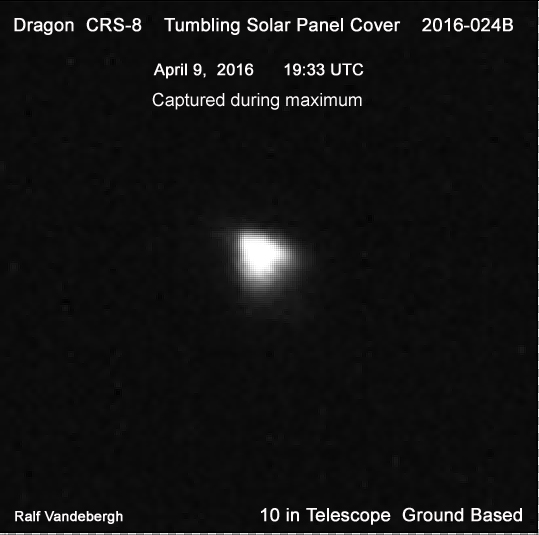 Dragon solar panel cover photographed while it was tumbling and showing the surface-side causing to brighten to maxium saturation. Taken with a 10 in telescope on April 9, 2016 (credit: Ralf Vandebergh)

Dragon Capsule Seen in the Telescope

The Dragon spacecraft itself was passing 1 minute following the International Space Station in a much higher orbit. Imagery of the Dragon with the same setup as used for the solar panel covers revealed clearly the shape of the capsule including the flattening on top. 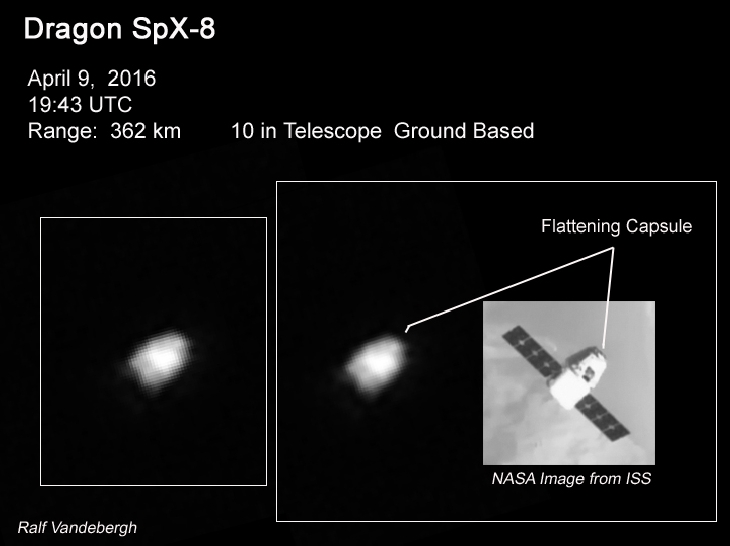 Dragon CRS-8 spacecraft photographed one day after launch on April 9, 2016 through a 10 in telescope (credit: Ralf Vandebergh) 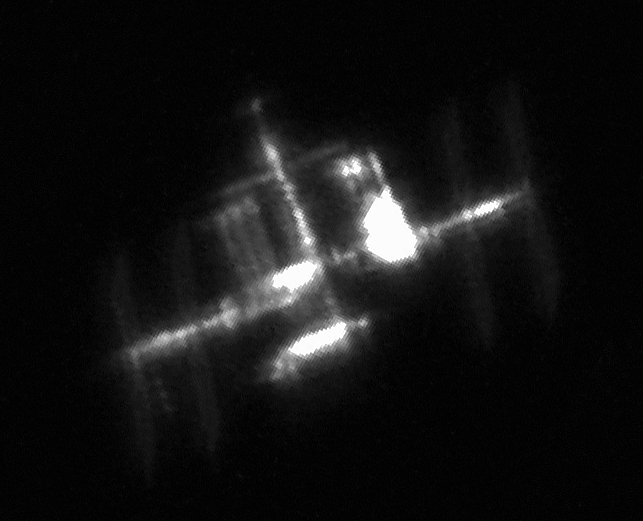 The ISS photographed on April 9 when the Dragon CRS-8 was orbiting, trailing by one minute. (credit: Ralf Vandebergh)