These are the first known detail images of USA-245, the last Keyhole spacecraft in the program captured with a 25 cm telescope on August 5, 2015 near perigee from a distance of 289 kilometers while it was 277 kilometers above the ground. At the time of imaging, the satellite had been in space for almost 2 years. In these images, different elements such as the telescope tube and the thick compartment for the instrument bay can be clearly seen. (compare with conceptual layout below). The thicker instrument unit appears bright white in nearly all ground-based images of Keyhole satellites. Also, there is a hint of solar panels. 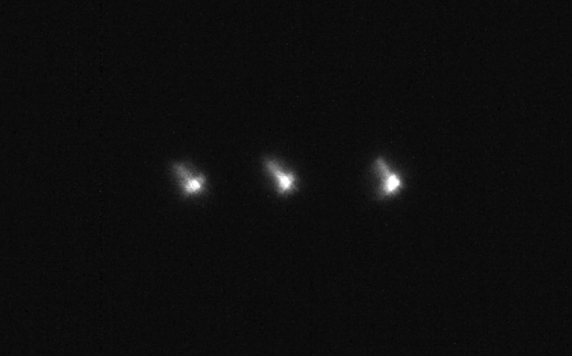 USA-245 or NROL-65 was launched from Vandenberg Air Force Base at 18:03 UTC (11:03 local time) on 28 August 2013. It is the last launched copy in the KH-11 Kennen/Kennan (Keyhole) series. This class of reconnaissance satellites is known for their optical similarity to the Hubble Space Telescope (HST) but probably with differences in the exterior. Also a recent gift of 2 possible KH-11 spacecraft by NRO to NASA revealed that the new KH-11 type is likely a shorter version of the Hubble with shorter focal length and a shorter instrument bay. Factory images of the Keyhole satellites are not available. In 2013, high resolution images of USA-129 were captured near perigee depicting interesting detail. At that moment, the last Keyhole USA-245 had been in orbit for just one month.