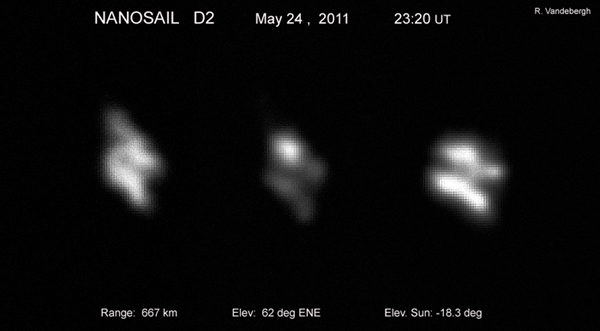 Nanosail-D photographs taken during a northern pass on May 24. Compare the visible structure to the image obtained by Ron Dantowitz at the Clay Center Observatory 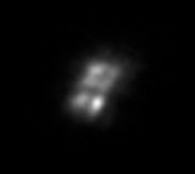 Nanosail-D was a NASA space sail prototype, part of the FASTSAT project. The sail reentered the atmosphere on September 17, 2011 after 240 days in orbit. According to NASA, the spacecraft performed beyond expectations.  Reentry occurred before my last attempts to observe the sail: at the time there was in fact no information available about the status of the sail, so my attempt resulted in a failure. According to Dean Alhorn, principal investigator for the  NanoSail-D project, ”The final rate of descent depended on the nature of solar activity, the density of the atmosphere surrounding NanoSail-D and the angle of the sail to the orbital track.” Athorn remarked how the satellite reacted to the sun’s solar pressure: “The recent solar flares increased the drag and brought the nanosatellite back home quickly”. 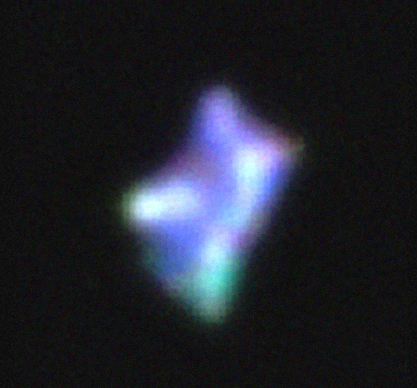 To me, Nanosail-D  remains one of the most interesting objects I have ever seen, primarily because of  its mysterious behavior: sometimes the sail was visible with the naked eye, others it was almost invisible; sometimes it was flashing, others not at all. The reasons of this visible-invisible cycle can be explained by the shape of the thin sail. The behavior of a steady object, flashing on and off, may have something to do with illumination angle and-or observing angle. This phenomenon  is not new to me: I have been noticing it for long time by observing SL-4 upper stages from Soyuz/Progress launches. Those rocket stages tend to show a similar behavior, which seems to vary with the observing angle or illumination angle, depending on whether is passing through the South or  the North. However,  my last observations of SL-4 stages through the south presented also evidence of slow tumbling rates, a factor that  did not make the investigation any easier. Regarding Nanosail, the differences seemed stronger depending on the elevation, and less on the  azimuth. Even high resolution Nanosail images don’t necessarily provide clarification. During the May 24 pass, the atmosphere was clear, providing the chance for an high resolution capture. The naked eye observation presented a steady pass, with not many visible flashes. Yet, the frames of this session presented clear indication of tumbling. A previous pass through north-west on May 22 presented a visible high frequency flashing, which resulted indeed in an interesting video, but lower in resolution because of the unfavorable atmosphere. My first observation, on April 24, presented yet another condition: the sail appeared relatively steady, but during the pass, it became fainter for a period, an indication that at that time it was already rotating slowly.