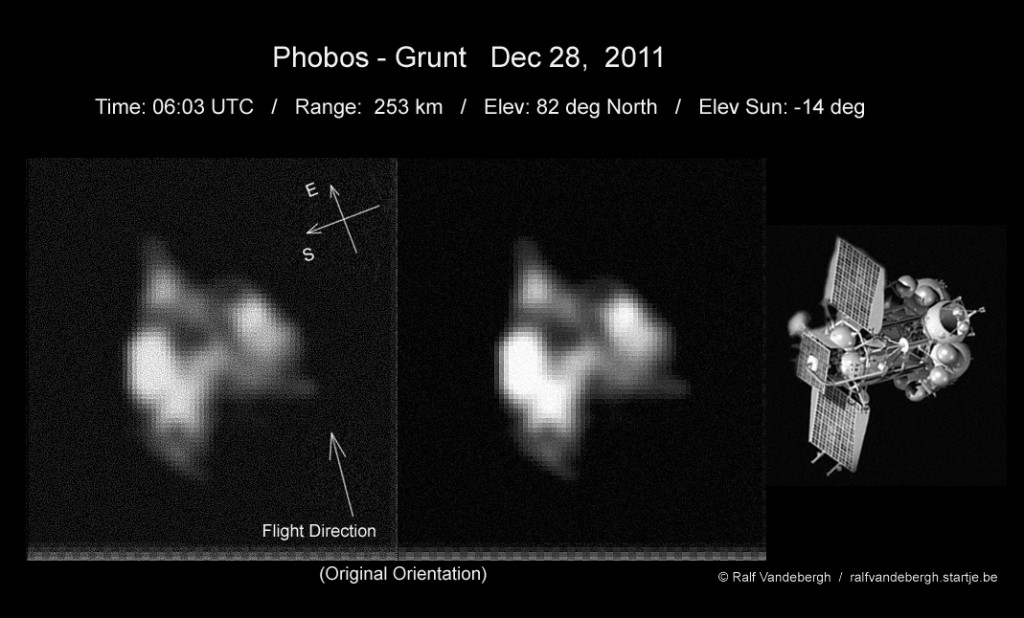 UPDATE:  Image-animation confirmation of a (partially) sideward movement of the spacecraft.

The picture above explains the orientation of Phobos-Grunt  in the latest ground-based images, taken December 28, 2011. I figured out the orientation with the help of ISS images taken during a similar pass and with the camera mounted in the same orientation. Finding out the orientation is not always easy, as the telescope/camera combination can turn an image in different directions depending on the optical path, but the orientation of the ISS in space is known, and it can be used as a reliable source. The impression I had is that the probe was flying partially sideward in the direction shown on the image. I didn’t have the same impression in the images of the November 29 session. At this point I can’t be sure whether the attitude of the probe has really changed, or if it is just an effect of perspective, a due to differences in observing angle. Note also the orientation of the solar panels, clearly visible in this image, taken roughly when the spacecraft was at the closest distance. Full-resolution image.

Nearing the end of the last visible pass window of the stranded Mars Probe, before its predicted reentry mid January, 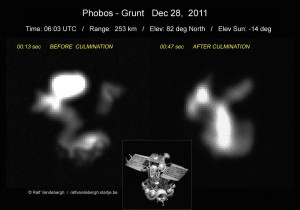 I hoped to take at least one more picture set after the first images I took one month earlier, on November 29. I hoped this final picture set would give a final and definitive clue about the status of the probe, especially if I managed to capture it in a higher pass. The sky remained cloudy during these final passes, until December 28. The spacecraft was going to make its last high pass over the Netherlands, and luckily enough, a clear sky was predicted, so I decided to stay up almost all night to be sure to not miss it and -in that case- to setup the equipment for high resolution imaging. I was curious about how its appearance would have be, given several reports of brightness variations, flashes, and flares over the last month. But the spacecraft showed up surpringly stable, or at least that was my impression during the few seconds of this fast pass 82 degrees high through the North, flying from West-Northwest into Eastern direction. As I had to concentrate on tracking, it is very well possible I missed some fainter brightness variations, which are always present as the image below demonstrates. There seems to be a ‘minor’-flare on the reflective front surface of the Earth return vehicle, visible on top in the image. The striking orange color (in fact from the gold-colored foil), also noticed during the pass on November 29, was present again. The color of the foil is very well visible in the image. During both passes, my impression while tracking through the finderscope was that the color was more orange-red, while the images are closer to the real golden color. 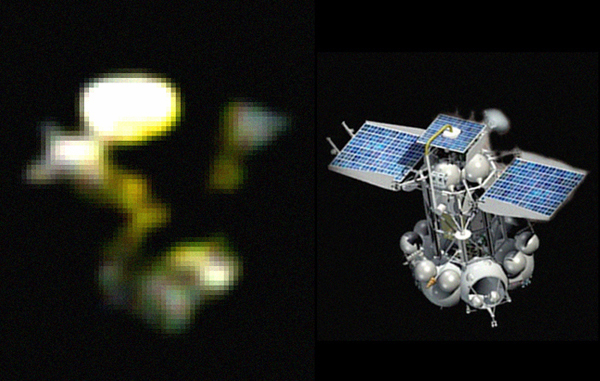