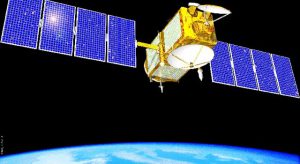 Jason-1 satellite. Launched in 2001, it lasted for 11.5 years. Its data on sea-level rise were combined with Envisat’s data (Credits: NASA).

The Jason-1 U.S.-French ocean-altimetry satellite, orbiting at about 1300 km with an inclination of 66°, lost contact with ground stations on June 21. Although all its instruments were healthy before the loss, the flight controllers were not able to reestablish downlink communications. Therefore, it was decided to decommission the spacecraft, by turning off its magnetometer and reaction wheels, and leaving the stricken satellite to orbit without control, on July 1.

Jason-1 was launched in 2001 and greatly improved our knowledge on global climate change by measuring the level of the oceans. Although it was designed to last from three to five years, it survived for 11.5 years. In spring 2012, following some concerns about the aging of the control systems, the spacecraft was moved into a “graveyard orbit”. Its extra fuel was depleted and the satellite was reconfigured to make observations of Earth’s gravity field over the ocean.

Jason-1 will not reenter Earth’s atmosphere for at least 1000 years. However, the spacecraft does not represent a hazard to the LEO environment, because the graveyard orbit is not highly populated by satellites or debris.

More concerns should be raised with the situation of NASA’s Galex. Galex was an orbiting space telescope designed to observe the universe in ultraviolet wavelengths, with the goal of investigating the history of star formation. Launched in 2003, its mission was extended three times over a period of 10 years. Galex was shut down on June 28 without any maneuver to decrease its orbit. Therefore, the spacecraft will remain in orbit at least for 65 years, before falling to Earth and burning up upon re-entry. Before the decommissioning, Galex was orbiting in a near-circular orbit at 697 km with an inclination of 29°. Several studies in the past years have been estimated that the most critical orbits, where the chance of collision with other space objects is higher, are located between 600 and 1000 km. At these altitudes, dead spacecraft keep on orbiting around Earth for many years, since the drag effect is almost null.

Currently, mitigation guidelines of the Inter Agency Space Debris Coordination Committee, adopted by UN in 2007, recommend that satellites in LEO should burn into the Earth’s atmosphere within 25 years from the end of operations, to prevent them from increasing the number of existing debris. Therefore, satellite operators should act appropriately to fulfill the requirements, normally by including enough fuel for deorbit. However, as highlighted by Envisat’s loss, satellite operators tend to capitalize on expensive spacecraft long after the planned mission lifetime, by “pushing their luck” until something goes inevitably wrong. 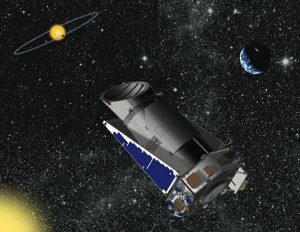 The Kepler space telescope, launched in 2009 to search for habitable planets outside the solar system (Credits: NASA)

Meanwhile, far from the Earth’s orbit, another spacecraft, the Kepler space observatory is fighting against the aging of its control systems. The 4.7-meter-long satellite has been in safe mode since mid-May, when it lost the second of four reaction wheels needed to maintain the accurate pointing of the spacecraft.

“The engineering team has devised initial tests for the recovery attempt and is checking them on the spacecraft test bed at the Ball Aerospace facility in Boulder, Colorado,” said Roger Hunter, Kepler project manager in an update issued on July 3. “The team anticipates that exploratory commanding of Kepler’s reaction wheels will commence mid- to late July.”

While Kepler’s fate remains unknown, the CNES’s Convection, Rotation and Planetary Transits satellite (CoRoT) was officially shut down in late June. CoRoT suffered a computer failure in November 2012 and the French space agency was not able to retrieve data from the telescope. After many efforts to restore the on-board computer, CNES decide to retire its exoplanet hunting mission.