Another innovative approach for mitigation of space junk orbiting the Earth was introduces recently under the NASA’s Innovative Advanced Concepts Program (NIAC). Scientists working on the project called SPaDe (Space Debris Elimination) envision that vertical bursts of air produced inside Earth’s atmosphere could be fired towards the threatening space debris in order to change its trajectory. 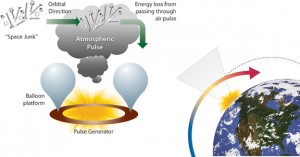 Researchers are currently reviewing technologies that would allow creating those powerful air spurts. According to Daniel Gregory who is the leader of the team based in Virginias Raytheon BBN Technologies Company, a balloon platform or a high altitude plane could be suitable to deal with the task. “Our preliminary results show that we can affect the orbits of low-Earth orbit debris. We think we have a viable solution, whether it’s big or small chunks, there’s no limitation in what SpaDE could target,“ Gregory explained.

The preliminary calculations show that it should be possible to affect several neighboring pieces of debris at the same time. „Hopefully with less than a 3 percent change in velocity you can de-orbit most low Earth orbit debris,“ the researcher concluded. The first estimates say that the amount of fuel that needs to be detonated to create these atmospheric pulses corresponds to 500 gallons of gasoline.

Result of 50 years of space utilization and exploration: The low Earth orbit heavily polluted by man made debris (Credits: NASA).

The SpaDe  Project seems to be promising as according to the researchers it doesn’t pose any danger to the satellites operating in Low Earth Orbit. The residual air pulses after doing their job should harmlessly fall back into the atmosphere without leaving any residual trace. The SpaDe spreadsheet distributed in a March Symposium of NIAC in Pasadena states that “in contrast to other proposed methods, SpaDE is fail-safe, in that it places no solid material in orbit where a malfunction could create new debris.”

The team is now focusing on estimating the potential costs of development and operations.

The increasing congestion in Earth’s orbits caused by thousands of spent rocket stages and out of order satellites has recently become a center of attention of the whole space community.

The following video sums up the evolution of 50 years of space light that turned the space environment around Earth into a dump site.
[youtube http://www.youtube.com/watch?v=L915JJMcu4s]