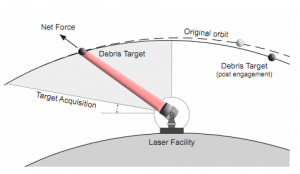 The problem of space debris is becoming more and more acute. (Credits: impactlab.net).

The US Defense Advanced Research Projects Agency (DARPA) plans to start recycling billions of dollars worth of non-working satellites. The aim of DARPA’s Phoenix program is to harvest and utilize valuable components from retired nonworking satellites in Geostationary Orbit and demonstrate the ability to develop new space systems from the parts at reduced cost.

“Satellites in orbit are not designed to be disassembled or repaired, so it’s not a matter of simply removing some nuts and bolts,” says DARPA program manager David Bernhart.” This requires new remote imaging and robotics technology and special tools to grip, cut and modify complex systems,” he says.

Without any doubt, recycling of space debris would require a much more elaborate technology than simple recycling plastic bottles or paper on Earth. Advanced robotics will be needed as well as further research into the exact methodologies for returning space junk to Earth to be broken down. Part of the agency’s plan is to use a ground-based robotics system and eventually establish a satellite servicing station in orbit. Smaller debris particles can be destabilized by firing lasers so that they plunge out of orbit and burn in the atmosphere. Future spacecraft should be designed from the beginning with the recycling strategy in mind, using advanced materials technology that makes the process easy.

The low Earth orbit is heavily polluted by man made debris (Credits: NASA).

But with the amount of orbital debris already reaching tipping point, complementary actions will be needed to manage the existing problem. These strategies include reduction in the number of satellite launches and global cooperation in their cleanup.

The Phoenix program comes at a time when space debris concerns are on the rise. Recent uncontrolled satellite descents have increased awareness of the potential hazards posed by orbital debris. In the beginning of November, the US National Research Council issued a recommendation for NASA to improve its Orbital Debris Program. After fifty years of space exploration, Earth orbits, especially at Low Earth Orbit (LEO) altitudes, are crowded with defunct satellites and spent rocket stages that pose a threat to spacecraft. Currently 21, 000 such objects larger than 10 cm are under surveillance.