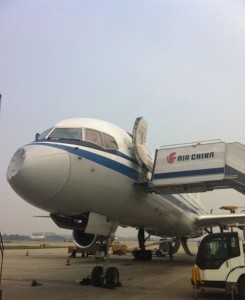 The damage caused by the unknown object to the radome of Air China Boeing 757-200 (Credits: The Aviation Herald).

An Air China Boeing 757-200 performing a flight from Chengdu to Guangzhou, in southern China, has experienced a collision with an unknown object while climbing at high altitude, on June 4. The collision resulted in evident damage to the radome, in the nose section of the aircraft. The Boeing 757 was then forced to return to Chengdu for safety reasons.

“The aircraft was climbing through FL260 when a large bang was heard from the nose section of the aircraft and the aircraft performance worsened,” reported Simon Hradecky of The Aviation Herald. “The crew stopped the climb and returned to Chengdu for a safe landing with a slightly rearranged radome.”

Initially, the post flight examinations ruled out bird strike due to the lack of blood, feathers or any other bird remains in the impact area. Later, AviationInspector.com reported that an officer at the Civil Aviation Administration of China supported the bird strike theory, praising the pilot for the nerve shown in safely returning the aircraft. The questions surrounding the collision multiplied when some pictures of the 757’s damaged radome were released through the Chinese microblogging website Weibo.

The bird strike hypothesis is not entirely satisfying to all parties however, as the aircraft was flying at 8,000 m when the collision happened. Although some species of birds such as swans or vultures have been spotted flying up to 10,000 m, Tommaso Sgobba, IAASS Executive Director and Head of ESA Independent Safety Office has stated that the damage does not match the typical damage to aircraft radome caused by birds or hail. In case of hail, the damage is mainly localized and the surface results scratched. Bird strikes tend to result in tearing of the aluminum shell protecting the radome. “There are clear marks of a tangential hit on the radome of the 757” said Sgobba. “I would say that it was not a bird strike but a hit by an object with a low mass to drag ratio some kind of foam or a balloon perhaps.”

Another possible cause that has been suggested was that the collision could have been caused by a natural or manmade space object, which had survived the severe conditions of entering into the atmosphere. The Aerospace Corporation has estimated that there are typically 100 or more large space debris objects that re-enter the Earth’s atmosphere randomly each year. According to Sgobba, who is actively involved in the determination of civil air traffic hazards posed by space vehicles, there are no tools that are capable of assessing the aviation risk due to space debris or meteoroids. To tackle this issue, the IAASS has started a preliminary study to develop the methodology for assessing the collision risk for aircraft due to uncontrolled re-entry of space objects.

The next issue of the Space Safety Magazine will contain a more detailed article about this study.